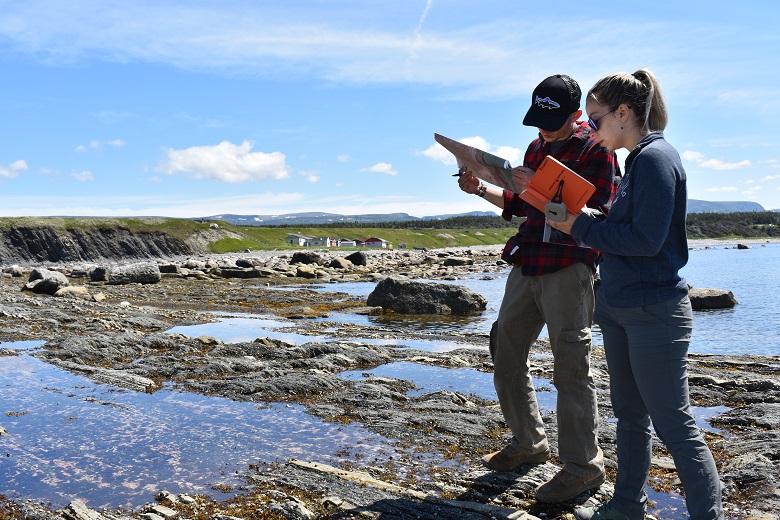 A group of students are having a rocky time this summer – and that’s just what they were hoping for. That’s because the eight students are attending a five-week, intensive, project-focused, international geology field camp led by Wilkes faculty on the island of Newfoundland in Canada. The camp, offered for the first time this year, began on July 7 and will conclude on August 9. In addition to three Wilkes students – Emma Sukowaski, Hannah Thornton, and Joshua Foust – attendees include students from Guilford College, the University of Houston, Drexel University, Temple University, and the University of Pittsburgh.

Students attending the camp are earning up to six undergraduate credits while developing the field skills necessary to pursue a career as a geoscientist in industry, consulting or academia. Students in the camp work in the field about eight to 10 hours a day. Field camp experiences include developing research strategies, collecting field observations and measurements, compiling detailed rock descriptions, measuring stratigraphic sections and constructing geologic maps and cross sections. Wilkes faculty teaching in the camp are Sid Halsor, professor of geology; Matt Finkenbinder, assistant professor of geology; Bobby Karimi, assistant professor of geology; and Julie McMonagle, lecturer. All four faculty are members of Wilkes Environmental Engineering and Earth Sciences Department.

The photo gallery on this page captures some of the field experiences.

SHINE Students were “College Students for a Day”...