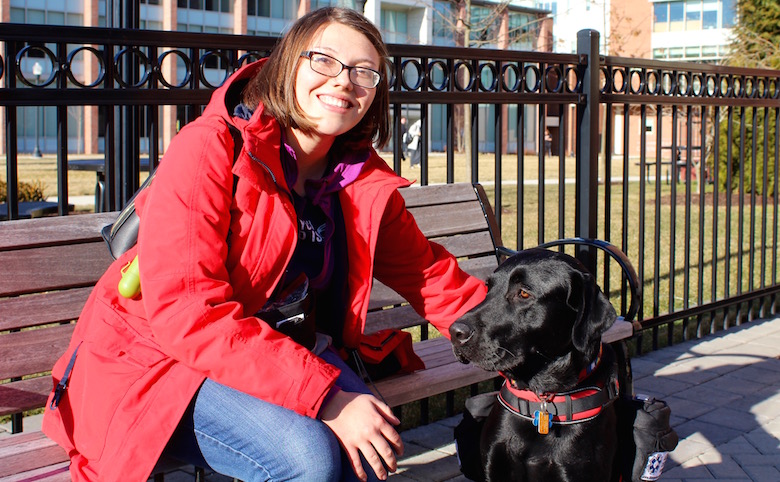 Ellen Weber and her black Labrador Retriever, Francis, bound across the Fenner Quadrangle together almost every day. While it looks like it’s just a student walking her adorable dog, Francis is actually on the job. He is an allergen detection service dog who is trained to detect latex. Weber has an airborne latex allergy that is life-threatening, so Francis sniffs his way through campus to keep her safe. 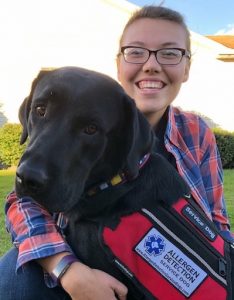 Service dog Francis and his owner, Ellen Weber, are a familiar sight around the Wilkes campus.

Francis is 1 ½ years old, turning two on March 31. Weber is a senior earth and environmental science major. The two live together in The Towers. You can follow Francis on Instagram at francis_the_nose_knows

In the following Q&A, Weber tells us about her canine companion:

Weber: He was trained by a woman in Colorado Springs (Ciara Gavin) who we contacted through an article in The Washington Post. She trained bomb sniffing dogs for the Air Force for 20 years before allergen dogs. So Francis was trained like a bomb sniffing dog, but it is a bomb that only affects me…She came to us for two weeks and trained me on how to use him. I went from not being able to leave my house to being able to come back to school and go anywhere. It was life changing, for sure. When I got him, he came right up to me and started licking my faces as if he just knew. And we have been best buds ever since. 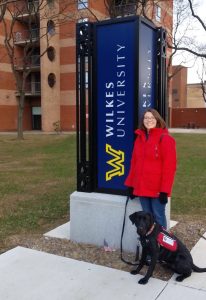 Weber and Francis enjoy a brisk walk outside their campus residence in The Towers.

Weber: They trained him as if it is a game of hide-and-seek. If he finds latex, he gets treats, love and praise. That is one of the reasons he loves working. We have to train him three to four times a week to keep up his skills so he can still detect through door seams, cabinets and drawers. He alerts me by sitting and staring. For example, if there was a (latex) balloon in a cabinet, he would sit and stare at the cabinet and then look at me for treats. If ask him where it is, if I miss his alert, he will “bonk” where it is with his nose.

Below is a video from Francis’ Instagram page. He is training in a Wilkes classroom.

An excerpt from training today…IMMA GOOD BOY! #foundit got them rubber bands good

Weber: The Greenway because that is where he plays with other dogs.

Weber: Most people want to pet him because he is really adorable. Most people don’t know not to pet them or talk to them (service dogs), but in general it is a good assumption to just assume they aren’t there. Unless you see them without their handler: then you are supposed to follow because a lot of the times they will bring you to their handler.

Weber: I just wish he knew how often he saved my life. I know he doesn’t because he thinks it’s just hide-and-seek. He doesn’t know how essential he is to my life and the everyday inner workings of it and I wish he did.