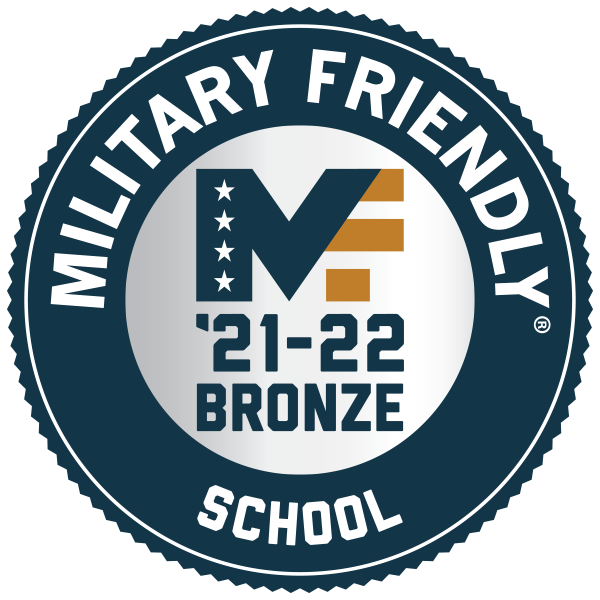 For the 11th consecutive year, Wilkes University has been designated a Military Friendly® School by Viqtory Media, parent company of G.I. Jobs magazine. Wilkes was recognized with bronze distinction, which is for institutions offering exceptional military and veteran programs and that scored within 30 percent of the 10th best school in their category. Wilkes is in the category for private schools offering doctorate programs.

The 2021-22 list recognizes the colleges, universities and trade schools that are doing the most to support America’s military service members, veterans and spouses as students and after graduation.

The Military Friendly® School list is created each year based on extensive research using public data sources for more than 8,800 schools nationwide, input from student veterans, and responses to the proprietary, data-driven Military Friendly® Schools survey from participating institutions. More than 1,200 schools participated in the survey with 747 schools earning the designation.

“Achieving bronze designation in the eleventh consecutive year of being a Military Friendly School shows that the University’s commitment to veterans, military members and their families only continues to strengthen and grow,” said Kaster. “During these challenging times and in the face of a worldwide health crisis, we cannot forget the men and women who continue to serve domestically and abroad. It is an honor to help them pursue their educational and professional goals.”

The Military Friendly® School designation comes as a result of the University’s support services designed to aid veterans in their transition to academic life:

During the pandemic, veterans’ services continue in virtual and face-to-face formats. A virtual ceremony honoring veterans near and far was organized by the University’s Veterans Council in November. Video of the ceremony can be found here.

“As a student veteran, I can attest to the care and consideration that Wilkes and its faculty and staff have provided to veterans of our Armed Forces. At Wilkes, I have felt motivated and supported, and enjoyed the camaraderie provided by the Veterans Council and the Veterans Lounge,” said Michael Young, president of the Wilkes Veterans Council. “In addition, Wilkes participates in the Yellow Ribbon Program, which is an excellent benefit for veterans who wish to pursue higher education. I want to personally thank Lt. Col. Kaster. Because of him, our student veterans have achieved so much.”

In 2020, Wilkes senior Justin Newcomer of Newfoundland, Pa., received a Student Veteran Leadership Award from G.I. Jobs magazine. Newcomer, an electrical engineering major, was one of 48 student veterans nationally receiving the award and was featured in the publication’s August issue. The award recognizes student veterans who have demonstrated a meaningful contribution to their institution of higher learning and to their fellow student veterans.

Wilkes also had two consecutive honorees of the Pat Tillman Foundation. Student Dana Hatwig was named a Tillman Scholar in 2018 while pursuing her master of science in nursing as a psychiatric mental health nurse practitioner. In 2017, alumnus Jason Homza was recognized as a student at the Commonwealth Medical College. Homza earned bachelor’s and master’s degrees from Wilkes.

Institutions earning the Military Friendly® School designation were evaluated using both public data sources and responses from a proprietary survey completed by the school. Methodology, criteria and weightings were determined by Viqtory with input from the