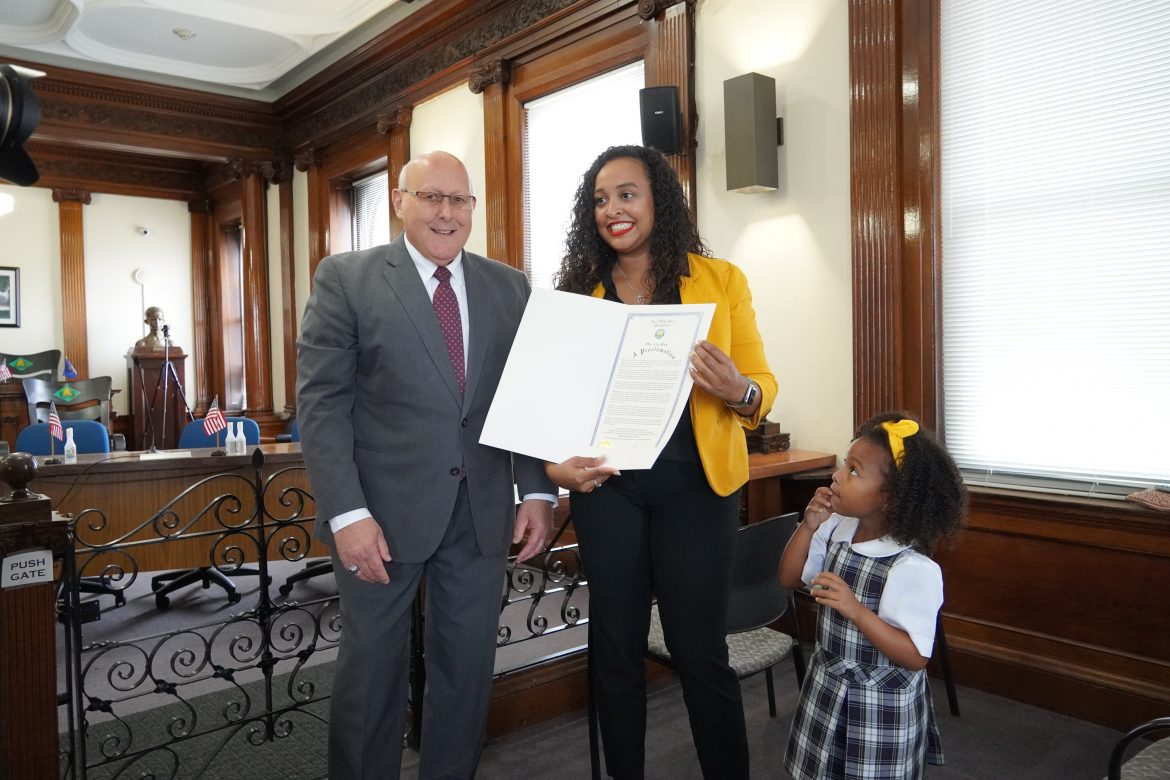 Wilkes-Barre mayor George Brown presents the proclamation to Erica Acosta, with daughter Elena looking on, naming her the Marshal of the fourth annual Multicultural Parade and Festival on Sat., Sept. 25, 2021 at noon on Public Square.

Erica Acosta, director of Diversity Initiatives in the Center for Global Education & Diversity at Wilkes University, was named this year’s Grand Marshal of the 4th Annual Multicultural Parade and Festival by Wilkes-Barre mayor George Brown on Tues., Sept. 21, 2021 at City Hall. Mayor Brown also announced that September 25 will now be known as Erica Acosta Day in Wilkes-Barre. Acosta was accompanied by her 5-year-old daughter Elena, who received the pin of Wilkes-Barre from Mayor Brown.

Acosta is a champion of diversity at Wilkes University and also in the community. At Wilkes, Acosta provides support and services for undergraduate and graduate students from under-represented groups, is the co-chair for the Council on Diversity, Inclusion & Equity, she developed and implemented the Diversity & Inclusion Student conference, and is the advisor to the Multicultural Student Coalition Club. In the community, Acosta serves as the executive chair of the Wilkes-Barre branch of the NAACP.

When asked why having a multicultural event in Wilkes-Barre is important to her, Acosta said, “Instead of focusing on what divides us, let’s celebrate what we have in common. Taste each others’ food, listen to music, and enjoy our cultural richness. Wilkes-Barre is endorsing these types of events and we need to celebrate our cultures.”

The Multicultural Parade and Festival will begin on Saturday, Sept. 24, 2021 at 12:00 p.m. on Public Square in Wilkes-Barre, with the festival to follow until 8 p.m.

The Center for Global Education and Diversity at Wilkes University