In The Lab With Dr. Ajay Bommareddy, Pharmaceutical Sciences 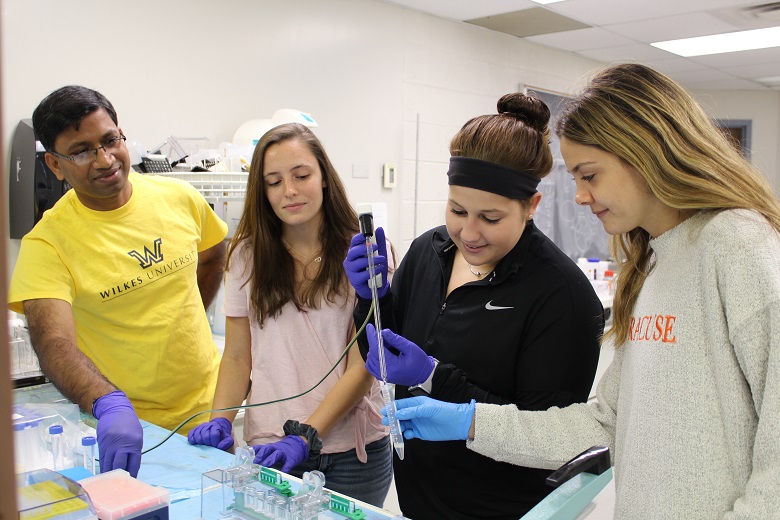 Inside the pharmaceutical sciences suite, Ajay Bommareddy debriefs his team of student researchers about the progress they’ve made in the last week. The associate professor of pharmaceutical sciences sits behind his desk while second-year student pharmacist Marissa Lewis and Sarah Schulman, a visiting student from Syracuse University, discuss what they will do for the day. Danielle McGlynn, also a Wilkes second-year student pharmacist, would miss research this week to complete required clinical rotation for her major.

Though this was a new start, the team melded quickly. Entering the lab located in Room 328 of Stark Learning Center, they donned purple gloves, sterilized their hands and the sterile hood before they began the day’s work.

The team is continuing cancer prevention research employing alpha-santalol, a naturally occurring compound derived from sandalwood oil. It is research that Bommareddy began as a graduate student at South Dakota State University and has continued for the last 15 years.  In summer 2019, his team is investigating the role of alpha-santalol in causing autophagy, a cell recycling process, in human prostate cancer cells. It is thought that autophagy may help suppress the development of cancer. The students are involved in culturing prostate cancer cells, treating the cells with various concentrations of alpha-santalol and processing the cells for protein analysis. They’ve also begun the process of looking at melanoma cells and how alpha-santalol may cause autophagy and impact their growth.

Around the lab, signage reading Do not touch items on this table without gloves is prominent. Flasks of cells used for research are placed in 37C incubator supplemented with 5% CO2 (carbon dioxide) while bottles containing cell growth media rest in the refrigerators clearly marked “NO FOOD OR DRINKS.” Microscopes, test tubes and glass bottles of various solutions are stationed on shelving units, table tops and placed inside equipment. The team was ready to begin.

At the conclusion of the previous day’s work, Bommareddy had prepared cells so the team could begin experimentation the next day. With the professor sitting in front of the sterile hood, Lewis and Schulman looked on as he applied the alpha-santalol solution to the prostate cancer cells. Bommareddy also explained the process of cell collection, from “flicking” cell pellet collected by centrifuging the cell suspension and adding growth media to them. Cells were then counted using hemocytometer to determine the number of cells per milliliter so that the required number of cells be plated for a specific experiment. Following him as he moved swiftly but cautiously from the sterile hood to the incubator, Lewis and Schulman asked questions and added insights on the research.

The student team in Bommareddy’s lab answered questions about their work:

What is a typical day in your lab? If cells need preparation for an experiment, the day begins with collection. Because it takes a few days to complete each test, much of the day-to-day seems repetitive, but the students know that results are quite literally growing. “We look under the microscope to see if the cells are there,” Schulman explains. “It’s pretty interesting because the cellular morphology changes so much from the day before.” The team also stains the cells to check for autophagosome formation, a marker of autophagy, and captures images using a camera attached to a microscope for analyzing induction of autophagy.  On the computer, the team explains the images captured of the cells-treated with alpha-santalol and control. Yellow-orange coloring autophagosome formation indicates autophagy has occurred inside the cell while green staining indicates a normal cell, serving as a control showing nothing has taken place.

“Aseptic cell culture technique is huge because you don’t want to contaminate the cells you work with,” Lewis explains. “It’s fascinating to see how cells grow in the lab first hand,” she adds. “You can see the cells under the microscope after treating with our compound and observe what happens to them after the course of treatment. It’s not just being told that alpha-santalol can cause cell death, but instead experiencing it visually.”

How many days and hours are you in the lab? Though it varies, a week of lab work can be three to five days from 9:30 a.m. to 4 p.m. “We do this research and we all also work (at jobs outside of Wilkes),” she adds. “Every day is different. It depends on the experiments we’re doing, how long they take, if we need to finish something.” Though time consuming, it’s been easy to balance it all. Lewis adds that Bommareddy keeps their schedule flexible to ensure they can complete meaningful research and fulfill their other obligations.

Tools of the trade:

The following equipment is used in the cell culture lab.

“We also use other equipment, such as an Infra-red scanner, Western blotting, and so on, for analyzing alpha-santalol’s effect on the cells,” Lewis noted.

How is this preparing you for the future? “Dr. Bommareddy talks to us about mechanisms and how things are working,” Lewis explains. “Going into P2 year (the second year of pharmacy school), that’s what we’ll be learning about: the mechanism of a medication and how it works in the body.”

The current student team is among more than 20 students who have also had a hand in Bommareddy’s research over the years – work that could possibly yield major outcomes to the world of pharmaceutical science. Right now, the testing is in the cellular level, a phase which can last years. The next phase, Bommareddy explains, is animal testing and then human testing for Food and Drug Administration approval. Though just the beginning, the students have gained extensive lab experience. This isn’t hypothetical research or examples from a text book: It is research that could change lives.