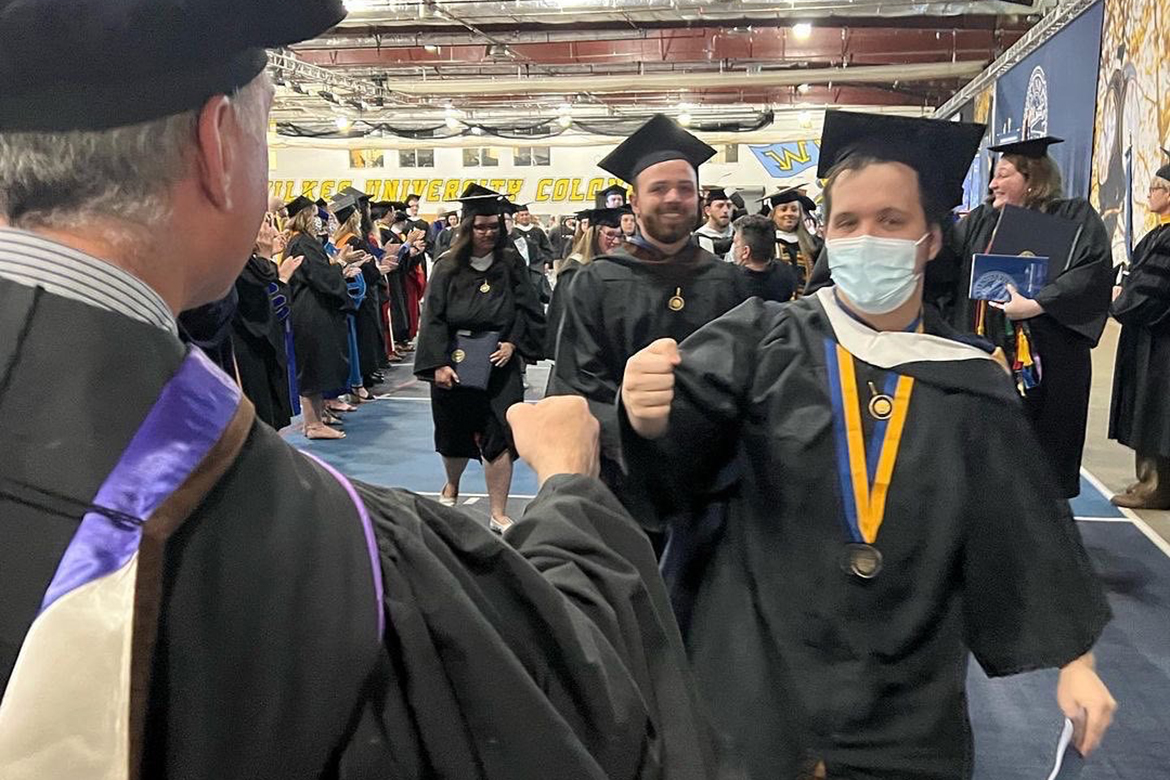 Wilkes University awarded over 700 bachelor’s, master’s and doctoral degrees at its 75th spring commencement ceremonies on May 21. The ceremony for graduate students receiving doctoral and master’s degrees was held at 10 a.m., while the ceremony for undergraduates receiving bachelor’s degrees was held at 3 p.m. Both ceremonies were held in the McHale Athletic Center in the Simms Center on Main, 169 S. Main Street in Wilkes-Barre.

Before both ceremonies, the traditional procession of graduating students led by bagpipers progressed from the Arnaud C. Marts Sports and Conference Center on South Franklin Street to the Campus Gateway, where graduates entered the McHale Athletic Center.

Paul S. Adams, vice president of student affairs, addressed the graduates at the 10 a.m. ceremony. This marked Adam’s last commencement before he retires from Wilkes in August after more than 40 years of service. Adams served as interim president in the 2019-20 academic year and led the University through the initial months of the pandemic.

Tanae Traister, Sunbury, Pa., also addressed the graduates at the morning ceremony. Traister was one of seven graduates who earned the Doctor of Philosophy in nursing. She is a nursing faculty member at the Pennsylvania College of Technology.

Wilkes President Greg Cant gave the commencement address at the 3 p.m. ceremony. Donald Ballou, Leesport, Pa., delivered remarks on behalf of the graduating senior class. He was also the recipient of the University’s Alumni Leadership Award.

The following awards were presented to students at the ceremonies:

The Mabel Scott Wandell and the Sterling Leroy Wandell awards are presented to the individuals in Wilkes University’s graduating class with the highest grade-point averages.

The graduates listed below are the 67th, 68th and 69th graduates to earn perfect 4.0 grade point averages in Wilkes history.

Thomas Q. Smith, Shohola, Pa.,earned the Bachelor of Science, summa cum laude, in mathematics and computer science. He graduated with a 4.0 cumulative grade point average. At Wilkes, Smith worked as a system administrator under the supervision of faculty member Fred Sullivan. He was also the recipient of the Honors Program Scholarship Award and the co-recipient of the James DeCosmo Award for Excellence in Mathematics and the Outstanding Senior Award in Computer Science. Smith was also the Outstanding Graduate for the College of Science and Engineering. He has been accepted to the Penn State PhD program in bioinformatics as a fellow of the Huck Institute of Life Sciences. He is the son of Lisa and Tom Smith.

The Mehm Prize is awarded annually to the undergraduate who most nearly represents the ideal respecting moral courage, unselfishness and noteworthy extracurricular participation significantly advancing the University on and off campus.

The activities and contributions of Ethan Philip Erickson, Eau Claire, Wisconsin,are significant. He has been a four-year member of the inaugural Wilkes men’s ice hockey team, was president of the Wilkes NCAA Student Athletic Advisory Committee, was vice president of the Dean’s Student Advisory Board for the Jay S. Sidhu School of Business and Leadership, was elected to the Delta Mu Delta National Honor Society and was selected to participate in Intercollegiate Leadership Wilkes-Barre. Erickson also received the Academic Achievement Award for Finance and the Professor Ted Engel Award for Excellence in Finance and was selected as the Outstanding Graduate for the Jay S. Sidhu School of Business and Leadership. Erickson will be returning to Wilkes this fall to pursue his MBA and will serve as a graduate assistant in the Office of the President. He is the son of Leah and Ethan Erickson.

The Alumni Leadership Award is given by the Wilkes University Alumni Association to the member of the graduating class considered to have made the strongest contribution to student life and the student activities program of the University.

Sordoni Art Gallery at Wilkes University Presents “Getting There” from June 21 to Aug. 7