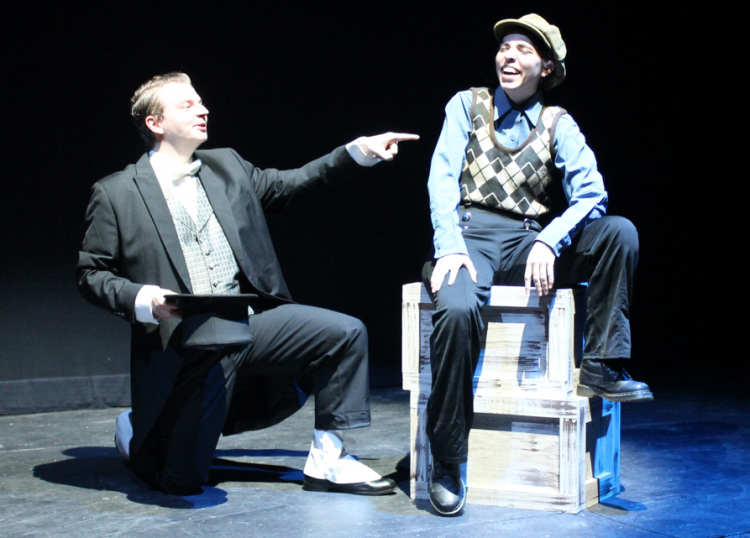 Alex Booth and Marcy Ledvinka star in the Wilkes production of "Nice Work If You Can Get It.'

Wilkes University Theatre presents the award-nominated musical, “Nice Work If You Can Get It.” Performances will take place on March 11, 12 and 13 at 8 p.m., and on March 13 and 14 at 2 p.m. All performances will be live-streamed free of charge. Attendees can email WUT@wilkes.edu for live-stream access.

The production is directed by Jon Liebetrau, Wilkes associate professor and director of theatre. Musical direction is provided by Ken McGraw, music theater director, with choreography by faculty of practice Lynne Esgro.

The show features music and lyrics by George and Ira Gershwin. It is based on the book by Joe DiPetro. Set in the 1920s, “Nice Work If You Can Get It”is the story of charming and wealthy playboy Jimmy Winter, who meets rough female bootlegger Billie Bendix the weekend of his wedding. Jimmy, who has been married three (or is it four?) times before, is preparing to marry Eileen Evergreen, a self-obsessed modern dancer. Thinking Jimmy and Eileen will be out of town, Billie and her gang hide cases of alcohol in the basement of Jimmy’s Long Island mansion. But when Jimmy, his wife-to-be and her prohibitionist family show up at the mansion for the wedding, Billie and her cohorts pose as servants, resulting in hijinks galore. “Nice Work If You Can Get It” is a romantic screwball comedy sure to delight audiences.

The musical was nominated for a variety of Tony Awards when it debuted on Broadway in 2012, with the featured actor and actress winning their respective categories. It was also nominated for Drama Desk and Grammy Awards.