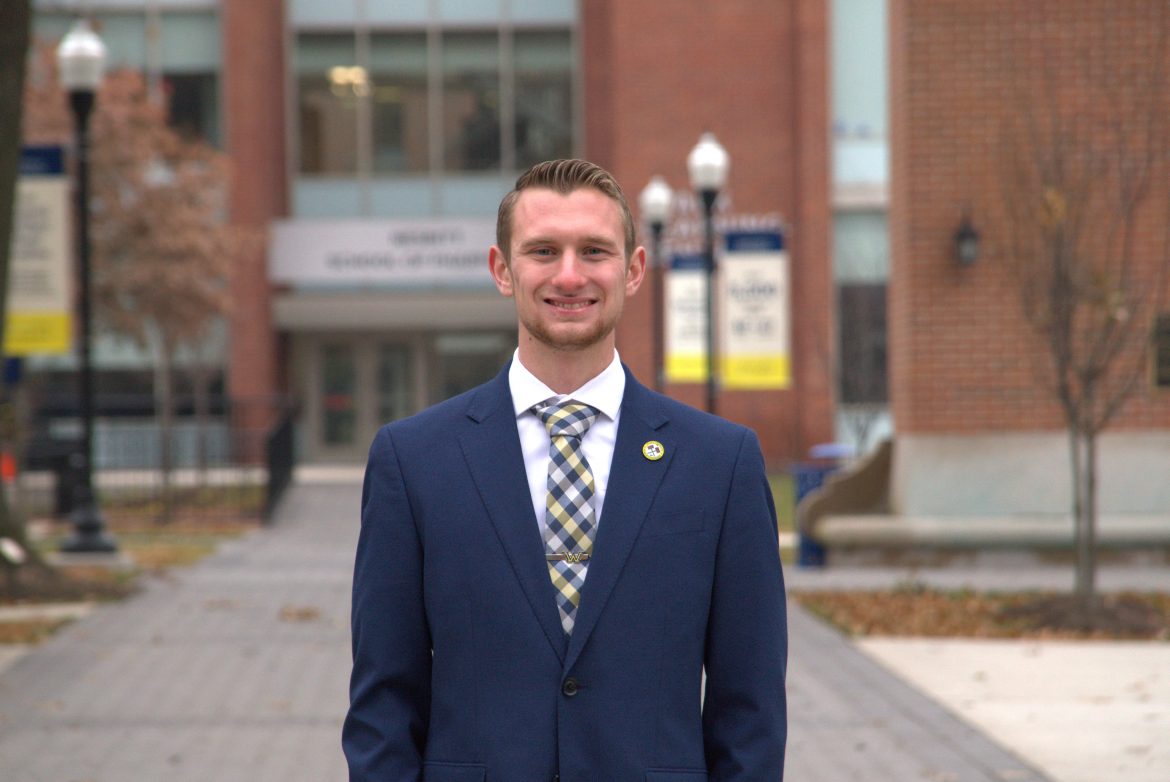 Biology major Kevin Long says an injury that sidelined his cross country running career when he was a high school senior set him on the path to four great years at Wilkes University. A promising runner who had some offers to compete at Division 1 colleges, he lost the offers and the interest of most coaches – except for Wilkes cross country coach Nick Wadas.

‘He always stuck with me,” Long says. “He said, ‘You’re going to heal one day. You can run here. You’ll always have a place in my program.’ Many other coaches, even Division Three coaches, were saying,  ‘You’re hurt, you’re done.’ ”

Wadas’ encouragement was one factor in Long’s decision to attend Wilkes. The other was the impression that he gained during three visits that he made to campus, starting with a visit during his junior year of high school and ending with his visit on accepted students day when he was a senior.

“I just had this home feeling, like I belonged here,” says Long, a native of Goshen, N.Y.  “I felt comfortable here. Where other institutions I visited had nice facilities… it just didn’t feel like I’d be comfortable and that I belonged.”

Long says his earliest impressions have proved to be true. Wilkes has been exactly the right fit. He healed from his injury and has competed in cross country since he was a freshman. But his running isn’t confined to athletic competition. He’s also successfully run for office in student government.  Now as student body president, he’s one of the most enthusiastic Colonels on campus. His other campus involvement includes being a resident assistant in University Towers.

Long started as a student government class representative after he was recruited for the job as a freshman. “I never did (student government) in high school, and I remember thinking ‘not for me,’ when I was first approached,” he says. After trying it, he was hooked. His path led to being class treasurer as a sophomore, executive treasurer as a junior and now, president.

He’s not daunted about leading the student body during a semester like no other. “I’m very optimistic,” says Long, clad in a mask emblazoned with a big yellow “W” –  required garb on campus in fall 2020. He notes that events have always been a significant part of student government. The restrictions posed by the pandemic have made it necessary to cancel some of them, such as the homecoming dance and casino night. But Long and his executive board are getting creative and coming up with alternatives. They are considering a different way to hold Club Day, which has long been a big event introducing new students to Wilkes’ many clubs and activities. “Stay tuned,” Long says. “We’re considering things like turning it into a club week instead of a single day.”

He also says fewer events means that student government will have more time to focus on policies that affect Wilkes students. He cites the campus parking policy and ways that student government interacts with campus clubs as among those that will be reviewed. Open forums will help the executive board to get students’ perspectives on issues to be addressed.

In addition to his cross country coach, Long counts several faculty mentors who have been influences during his Wilkes career. He cites his advisor Debra Chapman, who is faculty of practice in the Biology Department, psychology Professor Carl Charnetski, who advises Long in the sports psychology minor, and biology professor William Biggers, with whom he will complete his senior research project. The project involves determining if the marine annelid Capitella is able to grow on a harmful algal species.

As a senior, Long is looking ahead to his next chapter: medical school. He will complete his applications this fall. One of his favorite activities on campus already has given him a preview of what life after Wilkes will be like. He’s been part of the student team assisting the Alumni Relations Office with homecoming. He has loved seeing the enthusiasm of alumni as they return to campus. “It shows that Wilkes has that lasting effect on their lives,” he says.

Long already knows the University has had an impact on him. He enjoys hearing the alma mater played on the Burns Bell Tower on campus every day at noon – a practice that started when students left campus last spring due to the pandemic and has continued this fall.

“If I was given the choice all over again, I can’t see myself anywhere else,” Long says.

“Jim” Of All Trades: Getting to Know Jim Lennox, Director of Instrumentation

SHINE Students were “College Students for a Day”...