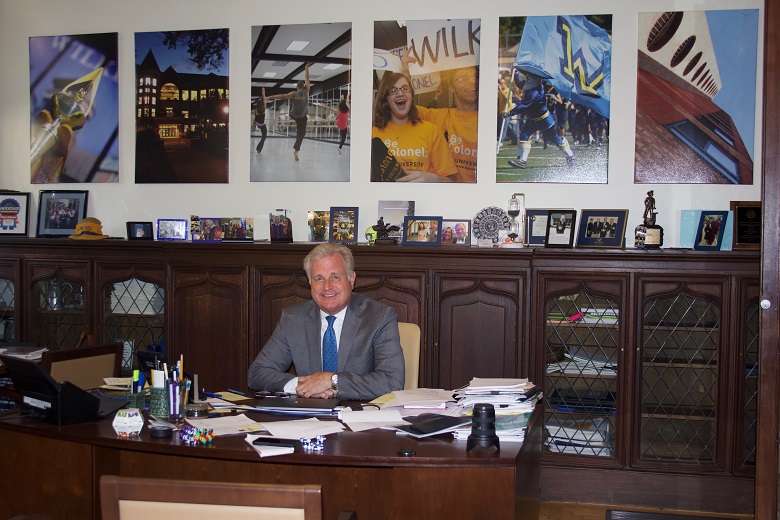 News@Wilkes introduces a new feature, Office Visits. Over the course of the year, we’ll be visiting the offices of faculty, staff and students to learn what workspaces reveal about their inhabitants.

Even before you enter Wilkes University Interim President Paul Adams’s office on the first floor of Weckesser Hall, there’s a piece of history to be found. Folding back one of the office’s French doors that open into the foyer, Adams points out a distinct line on the woodwork about a foot above the parquet floor. Below the line, the wood is lighter, as if bleached.

“That’s the flood water line,” Adams explains, referring to the water that inundated the Wilkes campus and the city of Wilkes-Barre in 1972 in the aftermath of Hurricane Agnes.

But the ghost of floodwaters past isn’t Adams’ favorite place to begin the tour of this office in one of the most historic buildings on campus. He goes to one corner and takes down a framed black-and-white photograph perched on top of one of the built-in bookcases. It’s of a serious-looking man with a moustache. The inscription on the photo mat states “Frederick J. Weckesser, 1867-1953.” Tiny type in the corner of the photo states “Perie McDonald/New York, Photographer of Men.”

“I feel like I need to start with Mr. Weckesser,” Adams states. “After all, this was his house.”

Built between 1914 and 1916, Weckesser Hall became part of Wilkes University’s campus in 1956 after the passing of Mrs. Anna Weckesser. Adams’ office on the first floor, with windows facing South Franklin Street, was Frederick Weckesser’s study. A real gentleman’s room, it included a built-in humidor for Mr. Weckesser’s cigars. Adams opens a door in the built-in cabinet behind his desk to reveal the space that still carries the faint fragrance of tobacco.

Built-in cabinets and bookcases, such as the one containing the humidor, line two walls of the office. Adams opens one of the ornate built-in bookcases across the room from his desk to reveal a complete set of printed Wilkes bulletins, dating back to the University’s early days as Bucknell University Junior College until the present day. The bulletin, then as now, summarizes academic requirements and course offerings for students. Next to the bookcase, leaded glass windows facing South Franklin Street soar to the ceiling. Adams points up to four stained glass windows near the ceiling. Two bear Latin inscriptions. When he moved into the office as vice president for student affairs in 2013, he researched their translation.

“The first one on the left sayings ‘Light comes from above.’ The second one essentially translates as ‘Don’t think bad thoughts,’ ” Adams says.

In addition to historical artifacts, the office also contains many of Adams’ personal mementoes from a 40-plus year career at Wilkes. They include photos and notes from students, pictures of colleagues and of his wife Jean and daughters Lindsay and Caroline.

Other noteworthy artifacts in the office include:

October 16, 2018
This form needs Javascript to display, which your browser doesn't support. Sign up here instead