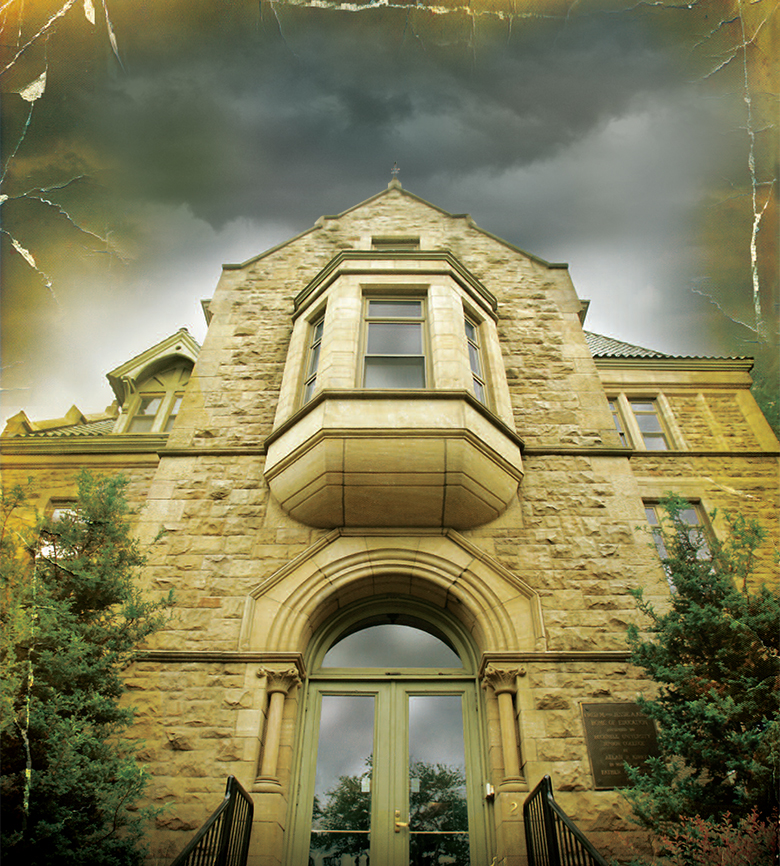 The year was 1969 – and Wilkes co-eds claimed that a ghost walked in the residence hall. 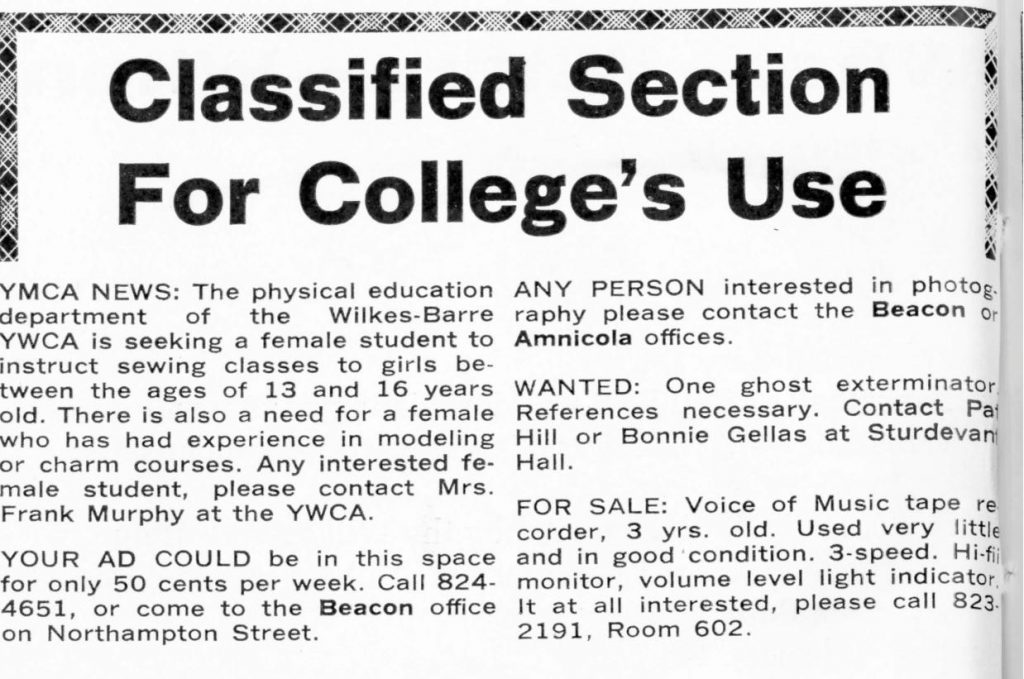 Classified Ad in the February 14, 1969 issue of the Wilkes Beacon.

In March of that year, ghostly happenings were so much the talk of campus that The Beacon ran an editorial about the ghost stories, stating, “…students on this campus take these stories seriously — if not the tales behind them, at least the fact that there are strange inexplainable goings-on. Some talk of starting ghost-hunting parties, or holding séances or going back to the good ol’ Ouija board. Whether they are serious or not, even the skeptical agree that the tales add a bit of flavor and mystery to the old buildings on campus.”

University archives and back issues of The Beacon, all show that ghost stories and haunted happenings have been part of campus lore throughout its history. It’s part of the collective memory of generations of alumni. Here are some of the most famous Wilkes ghost stories.

As the home of the University’s admissions office, Chase Hall is the first building prospective students see at Wilkes. Built in 1917, it was the home of Frederick Merrill Chase and his family. Chase came to Wilkes-Barre at the age of 14 and worked his way up the coal industry ladder.  Four years after construction was completed on his mansion, he died. A decade passed before the building was given to Wilkes, then Bucknell University Junior College, by the brother of Mrs. Chase.

There is evidence that Mr. Chase may still be “living” in his old home.

This editorial from the March 28, 1969 issue of The Beacon shows that ghostly activity was all over campus.

Sturdevant Hall has been used for many functions since it was acquired by Wilkes in 1951, including serving as a women’s dorm, the registrar’s office, the office of residence life, and the education department and several other uses.

Through all of its incarnations, there’s been one permanent resident: a ghost.

Back in 1969, the girls living in Sturdevant were convinced that their residence was possessed. Often, they would wake to the rapping of a fist on their door, only to discover that there was no one there. It was that kind of activity that led them to run the ad in The Beacon for a “ghost exterminator.”

Kirby Hall sits on the “number one” plot of Wilkes-Barre’s original town plan. Stephen Leonard Thurlow, a coal baron, purchased the lot in 1872, and commissioned Frederick Clarke Withers to design what is now known as Kirby Hall. The building changed hands twice before Fred Morgan Kirby acquired it in 1905. However, along the way the house seems to have picked up an unwanted caretaker.

According to a 1981 edition of Wilkes College Quarterly, around the turn of the century, while the home was owned by Reuben Jay Flick, a colorful character named Poker Pan was allegedly killed in the house during a gambling dispute. The murder occurred in what was then the music room.

Poker Pan may not have taken kindly to having his card game suddenly interrupted.

Often people hear footsteps on the stairs. Some even claim to feel a hand on their backs – just before falling down the stairs.

According to The Beacon archives, people have reported seeing a strange mist by the windows. One report talks about a professor doing late night research on the second floor. As he exited the building, he saw a white mist in front of him. As he approached it, the mist retreated up the stairs.

Conyngham Center was built in 1897 by William Hillard Conyngham. He hoped that this home would serve his family for many years. To cement that hope, Mr. Conyngham had family photographs placed in the building’s cornerstone.

Today, the Conynghams’ presence may extend beyond those photographs.

The Lady in Red

Weckesser Hall is one of Wilkes’s most iconic buildings, and one of the most storied when it comes to ghosts.

The home was built by Frederick J. Weckesser, a hardworking business man and former director of the F.W. Woolworth Company, between 1914 and 1916. The home still features a working elevator, surround shower, giant chandelier, and indoor rain gutters. The home may also feature some of its original owners.

Another tale involves a University staff member. As she was setting up for an early morning meeting, she noticed an older woman in a red dress standing on the stairs. The staff member smiled and went about her business, but when she went back to check on the woman, she had disappeared. As the staff member turned to resume her duties, she noticed a picture of a woman hanging in the entranceway. The picture looked exactly like the woman she had seen on the stairs, and under it was a small plaque with Mrs. Weckesser’s name engraved on it. The staff member reportedly tendered her resignation later that day.

The Girl on the Third Floor

Doane Hall was Wilkes University’s only residence hall where quiet hours were observed 24/7. But one former resident broke the rules at the South River Street mansion, as sounds from another world could be heard coming from the third floor.

Residents have often complained about the strange occurrences in Doane, but they always know who to blame: the girl on the third floor. Campus legend says that a girl hanged herself on the third floor before Wilkes acquired the building in 1973. What adds to the mystery and fuels the stories is the single white, steel door with no knob that blocks people from using the staircase to the third floor.

The Ghosts of Prohibition?

Waller Hall was originally built as the home of Julius Long Stern in 1925. The home is known for being one of the most elaborate residence halls that Wilkes owns. Waller is also one of the strangest. The building is divided into two sides – north and south. Wilkes even acquired the building in two parts.

Two unusual features of Waller are the mysterious passageways on the second floor. If students wanted, they could circle the entire floor without ever stepping into a hallway. The second strange feature is the bar — or speakeasy — in the basement. The presence of the speakeasy has become a popular piece of Wilkes lore. It’s a place few have seen, adding its mystique. Any self-respecting ghosts would certainly want to gather there.

During prohibition, prominent members of the Wilkes-Barre community could relax in the spacious downstairs bar, sit near an old converted brick fireplace, and order libations from the bartender. Perhaps some of these party goers have stayed around waiting for their next drink.

Ghostly Showers and Other Tales

Max Roth Center houses the Center for Global Education and Diversity. The building also features many of its original elements, including a second floor shower. Workers have often heard the shower turning on at night while no one else was in the building. When the curious workers would go to inspect the shower, the tub was wet, but no one was there.

Roth Hall was built in the 1880s on the grounds of the First Baptist Church of Wilkes-Barre. The church occupied the lot from the mid- 19th century until the congregation left later in the century. The halls were part of a four-block home unit, which was the first multi-family unit in Wilkes-Barre. Benjamin Reynolds, a businessman, was the original owner. After the halls were converted into dorms in 1967, students would hear singing on nights and weekends, and complain about being tapped on the shoulder when nothing was there. No one knows if the spirits have remained during renovations, or if the construction workers sent them packing.

Weiss Hall was built for Edmund Taylor, a Luzerne County judge. The building features two elevated porches overlooking the Susquehanna River, a tower — and a ghost or two. For years, students have talked about the creaking of boards and the eerie feeling that they would get walking the halls.

Perhaps the ghosts are that of former owners, or one of the unlucky souls who experienced the whipping posts and stocks that once occupied the building’s grounds.