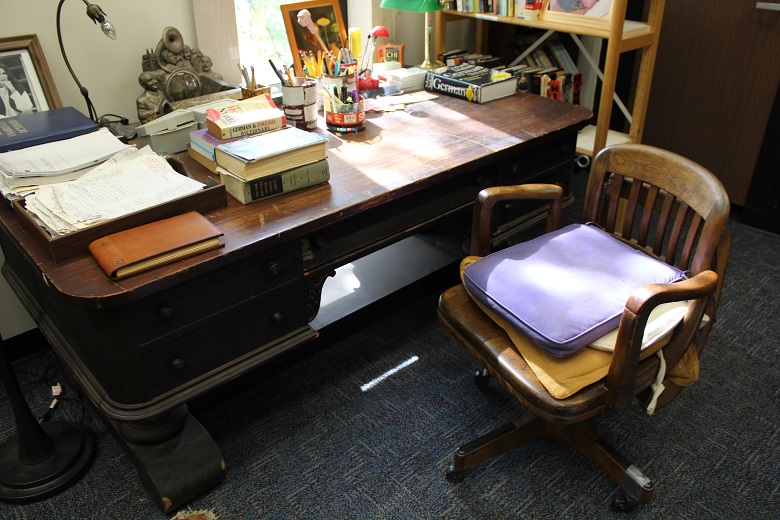 Wilkes University becomes the home of Pulitzer Prize-winning author Norman Mailer’s personal collection of manuscripts and memorabilia when a reception opens the Norman Mailer Room and Collection on Oct. 10 at 7 p.m. in the E.S. Farley Library. The event kicks off the Norman Mailer Society annual conference, “Mailer on Politics, Public Life, and Pop Culture,” which runs Oct. 10-12. Mailer, who died in 2007 at 84, was the founding chair of Wilkes’ Maslow Family Graduate Creative Writing Program’s advisory board. The event will be attended by several members of Mailer’s family.

A room that is a replica of Mailer’s last study in his Provincetown, Mass., home has been created in the Farley Library. It includes some of his private library, manuscripts and revisions dating from 1984 as well as his studio furniture.

Items from the collection on display include bookshelves and Mailer’s wooden writing desk and wooden swivel chair with several cushions. A bright green sign with the word “Bellevue” on it, which Mailer kept as a reminder of the 17 days he was confined in the ward of Bellevue Hospital in Manhattan, is prominently displayed.

Other donated items in the collection include Mailer’s entire 4,000-volume library from his home in Brooklyn, N.Y., and the contents of his third-floor study in his second home in Provincetown, which was donated to Wilkes by the Mailer Center in 2018. J. Michael Lennon, Wilkes professor emeritus and co-founder of the graduate creative writing program at the University, is Mailer’s official biographer. He and his wife, Donna Lennon, donated a large collection of Mailer’s manuscripts. Mailer’s daughter, Danielle, and and Peter McEachern donated a six-foot-by-six-foot portrait of her father by noted Cape Cod painter Nancy Ellen Craig. It is the only painting that Mailer ever posed for over his long life.

Along with the donations by the Mailer Center and the Lennon family, Lawrence Schiller, noted American photojournalist, film producer, director and screenwriter and friend of Mailer also contributed to the collection.

A separate room named for Mailer is established in the Farley Library and houses Mailer’s citations for the Pulitzer Prize and the National Book Award. The room contains his awards, signed editions of his many books and other memorabilia.

The Norman Mailer Society is a non-profit organization founded in 2003 to celebrate Norman Mailer, author of 40 books and the chronicler of the American Century. It has approximately 300 members and meets annually for three days for panels, papers, films and informal discussion about the life, work and reputation of the late Mailer.