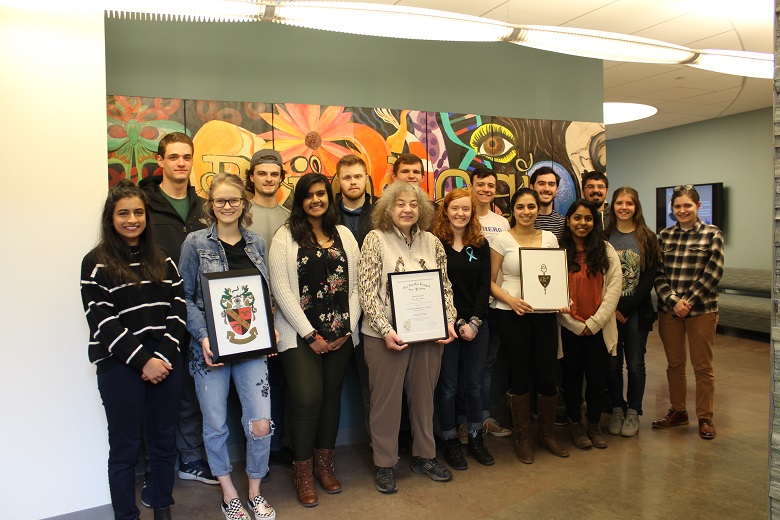 The Wilkes University Theta Delta chapter of Beta Beta Beta national biological honor society has been recognized as the top chapter in the nation with the 2017-2018 Lloyd M. Bertholf Award.  The award recognizes a chapter which has best promoted the triple aims of Beta Beta Beta: scholarship, dissemination of scientific information and promotion of biological research. It is the first time that the Wilkes University chapter has received the top recognition. The chapter previously had received an honorable mention. The award is determined by data which is collected at the end of the year and point system, then awarded the following year.

“This past year the officers have been very active and enthusiastic, and have motivated the members to initiate and participate in many activities,” explains Valerie Kalter, associate professor of biology and advisor to the Wilkes chapter of Tri Beta.  Club members made and delivered holiday greeting cards to children in a local hospital, raised money for Volunteers in Medicine, participated in the Relay for Life and presented their research in meetings. Students also participated in events such as Women Empowered By Science, Adventures in Science and Upward Bound as well as filled out welcome cards to students accepted into the biology program.

The award was first established in 1961 by Lloyd M. Bertholf, the third President of Beta Beta Beta and president of Illinois Wesleyan University. Its purpose was to provide national and local recognition to the chapter which most nearly met a series of criteria for program excellence. The Bertholf Committee presently bases the award upon the criteria: member activity in conducting and publishing research, participation in district and national conventions and other scientific meetings, chapter programming and activities and orderly record keeping and communication with the national office.

Beta Beta Beta was founded in 1922 at Oklahoma City University by Dr. Frank G. Brooks and his students. The idea of an honor society and professional society for biology students spread and by 1925 the society became a national organization. The Theta Delta Chapter was installed at Wilkes in 2001. Full members are juniors or seniors who have completed at least 16 credits in biology with at least a 3.25 grade point average and a 3.0 overall GPA.