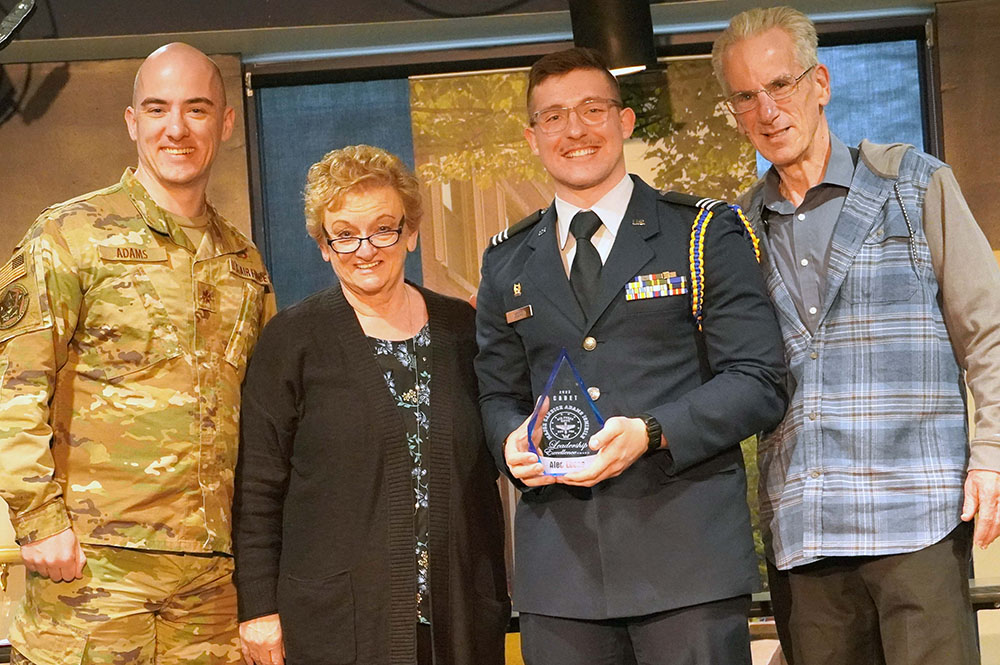 Twenty-four cadets were presented with awards during the Wilkes University Air Force ROTC Detachment 752 annual awards ceremony on Thursday, April 21. The ceremony took place in the ballroom of the Henry Student Center.

The highlight of the event was the presentation of the Maj. Candice Adams Ismirle Leadership Excellence Award, given annually to the cadet who best exemplifies and embodies the leadership qualities and enthusiastic spirit of the late Major. The award was presented to Cadet Alec Leese from Bloomsburg University by Ismirle’s parents, Sgt. Maj. (retired) Michael Adams and Sandra Adams, and her brother, Maj. Michael Adams.

Maj. Candice Adams Ismirle, a former member of the University’s Air Force ROTC detachment, lost her battle with breast cancer in 2016. A native of Brodheadsville, Pa., and a graduate of Pleasant Valley High School, she earned her degree in communications studies from Wilkes in 2003 and received her commission as a lieutenant. After graduation, she enjoyed a distinguished career in the military as a public affairs officer.

In 2016, the ROTC lounge located in the McHale Athletic Center was named in her memory.

The award description reads: “Maj. Ismirle was a true leader who worked tirelessly to collaborate and work with others to accomplish the mission. In addition, she fully believed in living life to the fullest extent; her engaging personality, positivity and encouragement of others was her trademark. She strove to make improvements and engage personally with others no matter where she was. A mission-driven leader, she excelled at any challenge or obstacle that came her way no matter how difficult.”

“Cadet Alec Leese was chosen because of his leadership, communication and critical-thinking skills beyond the traditional AFROTC training. Other cadets recognize his ability to mentor and train others and he has the ability to instill a deep sense of respect, discipline and empowerment in both underclass cadets and peers,” said Lt. Col. Sarah Hedrick, commander of the detachment. “Cadet Leese was the top cadet in his flight during Field Training at Maxwell

Air Force Base the summer before his senior year, ranking 4th of 567 cadets at the training. We are proud to present him with this honor.”

In 1972, Wilkes College was selected to host the air force ROTC program. Since then, Detachment 752 has trained and prepared hundreds of young men and women for future careers as USAF officers. The detachment includes Wilkes students as well students from other colleges and universities in northeast Pennsylvania who are committed to serving the U.S. Air Force after graduation.