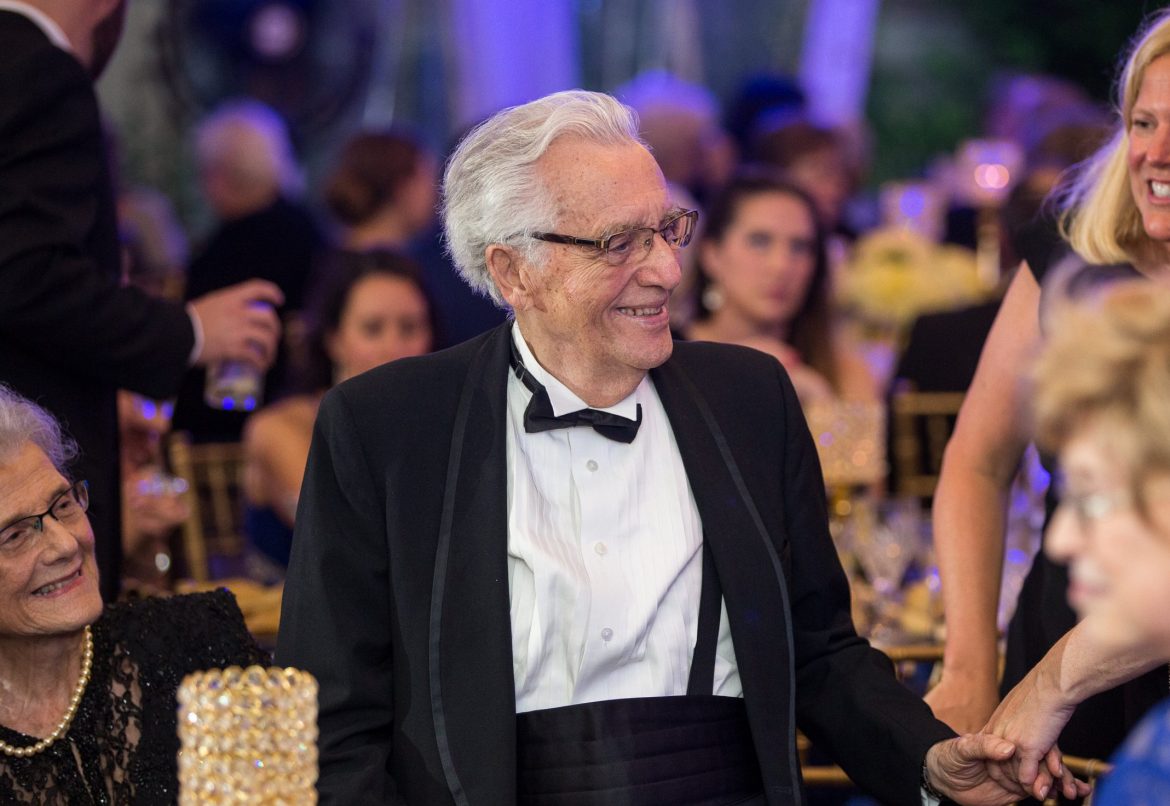 On Monday, Nov. 15, 2021, Wilkes University alumnus, supporter and friend, Clayton J. Karambelas, passed away. Together with his beloved wife, Theresa, he helped to transform the Wilkes campus through his loyalty, vision and generosity.

A native of Wilkes-Barre, Pa., Karambelas was the first born to the loving family of John Karambelas of Sparta, Greece and Mary Dukas Karambelas of New York City. He graduated from Meyers High School. He began his undergraduate career as a student of Bucknell University Junior College and went on to receive his bachelor’s degree in commerce and finance from Wilkes College in 1949. An active member of the student body, Karambelas served as student council president, was a member of the wrestling and tennis teams and Letterman’s Club and coached the swimming team. Karambelas served on the Alumni Association Board of Directors for many years, and was granted emeritus status in 2018.

Thanks to his father, Karambelas pursued his interest in flying and acquired his private pilot’s license before he could officially drive a car. Upon graduating from high school he put that experience to use by enlisting in the U.S. Air Corps. It was after his honorable discharge that he pursued his college career at Wilkes.

“It is impossible to walk through our campus without seeing tangible expressions of Clayton and Theresa’s love for both Wilkes and the students who call it home,” wrote University President Greg Cant in an announcement to the campus. “At the core of each of these contributions was Clayton’s desire to support our students and bring people together as a community.”

The Karambelas Media and Communication Center, the Karambelas East Campus Gateway and Karambelas Pergola behind Evans Hall all bear the Karambelas name. The digital marquee in front of the Dorothy Dickson Darte Center for the Performing Arts and the first floor concourse in the Henry Student Center were also made possible through their generosity.

The Karambelases lifetime commitment to Wilkes was recognized in 2016 when they received the President’s Medal, the University’s highest honor given annually at the Founders Gala.

“This is a massive loss. Our hearts are with Theresa and the entire Karambelas family. We mourn with her as we honor Clayton’s life and lasting impact,” concluded Cant.

His full obituary details his many successes and passions. About Wilkes, the obituary includes, “To say Wilkes University was important to him since graduation in 1949 would be an understatement. He served on many committees including the community and capital campaigns. In 1994 he served on the president’s council and many years on the alumni association board and earned their first director emeritus chair in 2017. He received the Eugene Farley Award, the Honor of Wilkes Colonel Award as well as the Wilkes Ancestral Colonel and was the recipient of the coveted President’s Medal along with his wife in 2016. As part of his legacy to Wilkes, he was proud to help fund the South Main Street, East Campus Gateway, and gift the Media and Communication Center, The Darte Center digital marquee, the Henry Student Center Atrium, the Cohen Science Center grand staircase, Library Web of Science project and the Greenway Pergola projects.”

Throughout his life, his work ethic and energy knew no bounds until recently. Karambelas was actively involved in the operation and management of his family’s 50 year old business, The Boston Candy Shoppe & Restaurant and The Betsy Ross on Public Square in Wilkes-Barre. During those years he was employed as a part-time commercial airline pilot for U.S. Overseas National, Loftleidir and Icelandic Airlines. He became a charter member of the National Coffee Service Association and began CK Office Coffee Service, the first of its kind in Northeastern Pa. He grew and nurtured this innovation for 30 years. During these years he formed a partnership with four other men and together they built the Wizard Car Wash in Wilkes-Barre, Kingston and Scranton. Another first of its kind, a three-minute, fully automated car wash. They developed an RV Campsite, Hidden Lake, in Shickshinny and built Key Market Distribution Warehouse Center in Dunmore.

Services will be held on Friday, Nov. 19 and Saturday, Nov. 20. Click here for more information.

Mark Stine, professor of communications studies: “The generosity of the Karambelas’ helped us build an amazing, state-of-the-art facility that has given our students the technological potential to influence the world around them in ways that they couldn’t have even imagined. The Karambelas Media and Communication Center created a synergy and atmosphere of collaboration among faculty and students that has led to hundreds of creative and exciting projects over the past few years.  One highlight of our facility is a centralized newsroom that’s used by all of the student media.  Every single day, students use that space to gather, work, and collaborate.  With convergence in the media and in the communication-related fields a reality, this center gave our students the opportunity to work in an integrated environment to learn and practice the collaborative skills they need in order to thrive in today’s communication industries.”

Bridget Giunta ’05, executive assistant to the president: “In 2008, I had the good fortune to don one of Dean Ralston’s iconic bow ties alongside Clayton for a photo to promote Homecoming activities.  Like the Homecoming theme that year suggested, our beloved Wilkes creates “ties that bind”.  Although we lost Clayton this week, he will forever be connected to us in spirit through his love for Wilkes and the abundant generosity he and Theresa so willingly shared with our campus.”

Paul S. Adams ’77, MS ’82, vice president of student affairs: “In the nine different decades that Clayton was a part of our campus, he was able to understand and influence Wilkes in all of its stages of development and success. Relationships have always been and remain at the core of what Wilkes represents, and who knew better than Clayton how to develop and nurture relationships. He was the quintessential Colonel. Clayton’s and Theresa’s generosity will influence the quality of student life and learning for Wilkes students for generations to come.