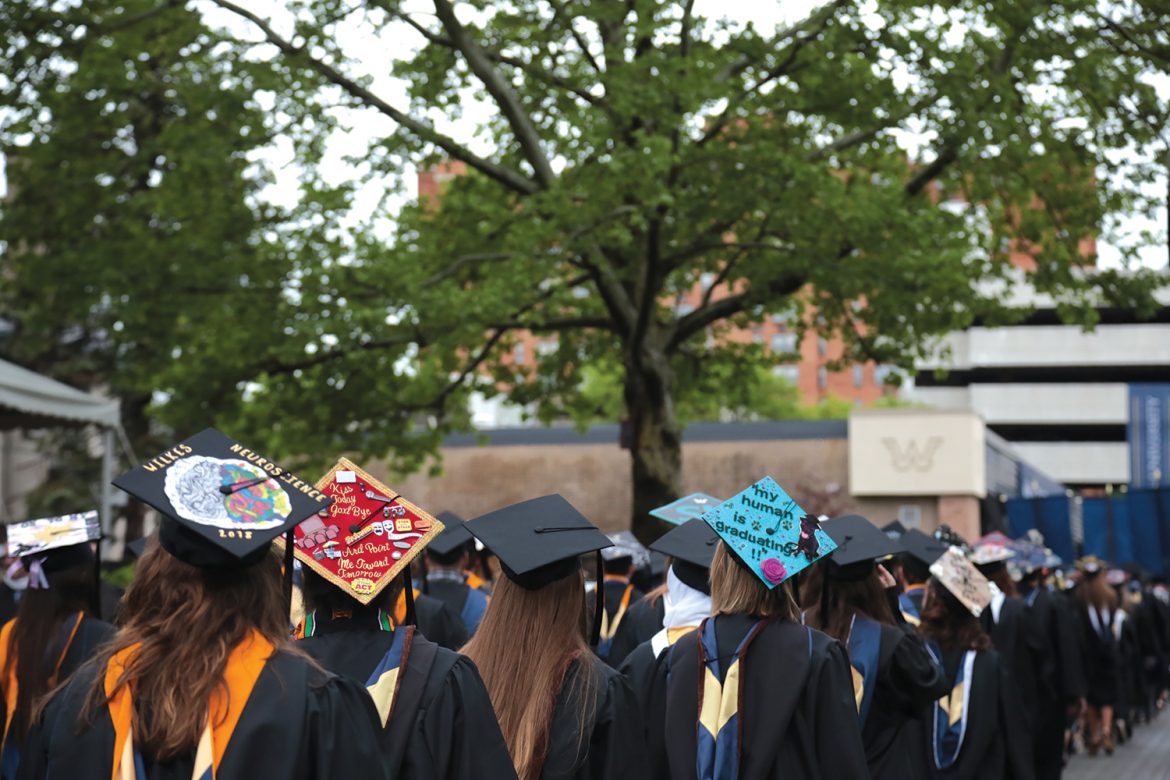 Perseverance was the theme of the ceremony that was postponed due to the pandemic.

A year after officially earning their degrees, Wilkes University honored the class of 2020 during an in-person commencement ceremony on Saturday, May 22. Approximately 130 members of the class who earned doctoral, master’s and bachelor’s degrees participated.

Each participating graduate was issued four tickets to the ceremony with approx. 550 additional guests in attendance. All attendees wore face masks for the health and safety of others. Wilkes conferred more than 700 degrees in May 2020. Due to the global pandemic, commencement was postponed.

The ceremony was held in the McHale Athletic Center of the University Center on Main. The traditional procession of graduating students led by bagpipers processed from the Arnaud C. Marts Sports and Conference Center on S. Franklin Street to the Campus Gateway before the ceremony.

Wilkes alumna and board of trustee, Kayla Rooney, greeted the graduates. Rooney, who earned her degree in 2015, is an associate at the law firm Cleary Gottlieb in New York City. She is currently on a one-year fellowship with the Bronx Defenders. Capt. Cody Morcom, a 2020 pharmacy graduate, addressed attendees. Morcom is a pharmacist in the United States Air Force at Dover Air Force Base, Del.

This was the first commencement for University’s seventh president, Greg Cant, who joined Wilkes in June 2020. Paul S. Adams, current vice president of student affairs, served as interim president during the 2019-20 academic year. As a tribute to his leadership and service during the pandemic, Adams presented graduates with their degrees during Saturday’s ceremony.

The following award recipients were acknowledged during the ceremony:

Taylor Hubiak, Glen Gardner, N.J., earned the Bachelor of Business Administration degree, summa cum laude, with a double major in management and marketing.She graduated with a 4.0 cumulative grade point average, the 64th graduate in Wilkes history to do so. She graduated in just three years while studying two majors. While at Wilkes, Hubiak received the Academic Achievement Award in Management in the Sidhu School of Business and Leadership and was an honors student. Hubiak was a delegate to the University Scholars Leadership Symposium in
Bangkok, Thailand, in Aug. 2018. She is the daughter of Renee and Drew Hubiak. She is currently employed as an inventory manager by the Califon Lumber Company in Califon, N.J.

Abdulrhman Almeky, Dallas, Pa., graduated with the Bachelor of Science degree, cum laude, with a double major in neuroscience and psychology. While at Wilkes, Almeky served as an e-mentor for first-year students, was a resident assistant and served as a student aide in the Office of International Engagement. Almeky made significant contributions to enhancing the quality of life on campus for Islamic students and worked to create and extend understanding and knowledge of different faith traditions. He is the son of Azza Mohammady Almeky and Ibrahim Moustafa Almeky. He is currently enrolled in medical school at St. George’s University in Grenada.

Six commencement ceremonies honoring the class of 2021 will be held during Memorial Day weekend.