Wilkes Students Make Virtual Orientation 2020 One for the History Books 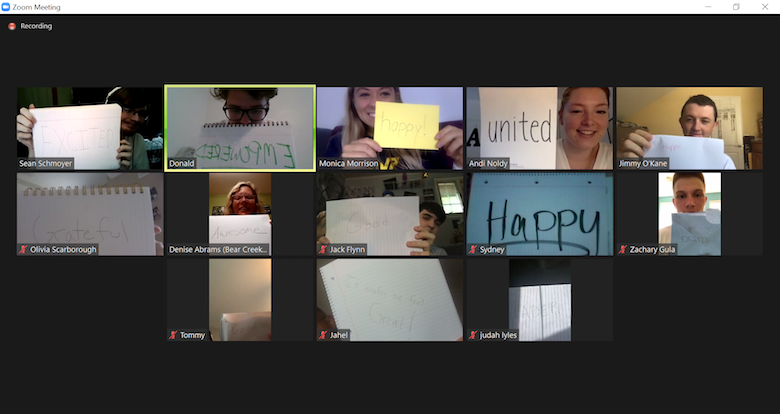 Members of the Class of 2024 share their thoughts during the community service session during one of Wilkes University's virtual first-year student orientations. Community service was part of each of two orientation sessions -- one held from June 28 to July 2 and another from July 12 to 16.

Orientation for first-year students at Wilkes introduces them to the University with an event that provides opportunities to make new friends, map students’ academic futures and engage in hands-on activities. New students typically enjoy an overnight stay on campus during orientation.

That was before the COVID-19 pandemic. The solution for the Class of 2024 was to hold a virtual orientation. Student orientation leaders, led by orientation coordinator Alanah Guerrero, a Wilkes senior nursing student, played key roles in creating a virtual orientation experience for two sessions held from June 28 to July 2 and from July 12 to 16. Melissa Howells, director of student development, supervised the student team. In addition to the student orientation leaders, e-Mentors and students who volunteer as members of the Blue Army helped to welcome the new class in the virtual space.

Orientation will continue in August with an expanded Welcome Weekend. A five-day event will begin with move-in day for first-year students on Wednesday, Aug. 19 and continue through Sunday, Aug. 23, the day before classes begin.

The student coordinators on the orientation team 2020 are:

Online orientation was not without its challenges. A city black out, phone lines being down and an interruption in WiFi connection posed some challenges – all overcome by the student team, Wilkes student development staff and faculty.

“This was definitely an orientation for the history books,” says Guerrero. “I can’t thank my team enough for rising to the occasion as quickly and as adaptatively as they did. Although this was not the orientation any of us have planned, it sure was a memorable one!”

Here’s a behind-the-scenes look at some of the ways orientation became a virtual event:

Meet and Greet: The virtual space became the place to see and be seen during orientation sessions held on Zoom or the Desire2Learn platform. Members of the first-year class met individually with their faculty advisors to put together their fall schedules. Meetings with financial aid counselors also were held. Incoming students also enjoyed Meet the Mentor sessions where Wilkes team of e-Mentors – upperclass students who serve as guides who ease the transition to college life – welcomed students and answered questions about life at Wilkes.

Socialize the Wilkes WAE: Wilkes Adventure Education (aka WAE) usually gets people up and moving with icebreakers and other activities. In the online orientation version, students participated in a variety of activities via Zoom breakout rooms. Students participated in a round of a game called hot seat, where students and E-mentors took turns asking each other any question they wished. They also played a version of Never Have I Ever and another game where players had to describe an image to group members using limited words who drew the image. (The winner was the person whose image came closest to the original.)

What happened to the mixer? Some of the social activities that are a hallmark of orientation were replaced with chances to win at Bingo and Wilkes Trivia – two events that happened by logging on to your nearest computer. Students had plenty of other opportunities to socialize virtually via Meet Your Mentor and Orientation Wrap-Up sessions.