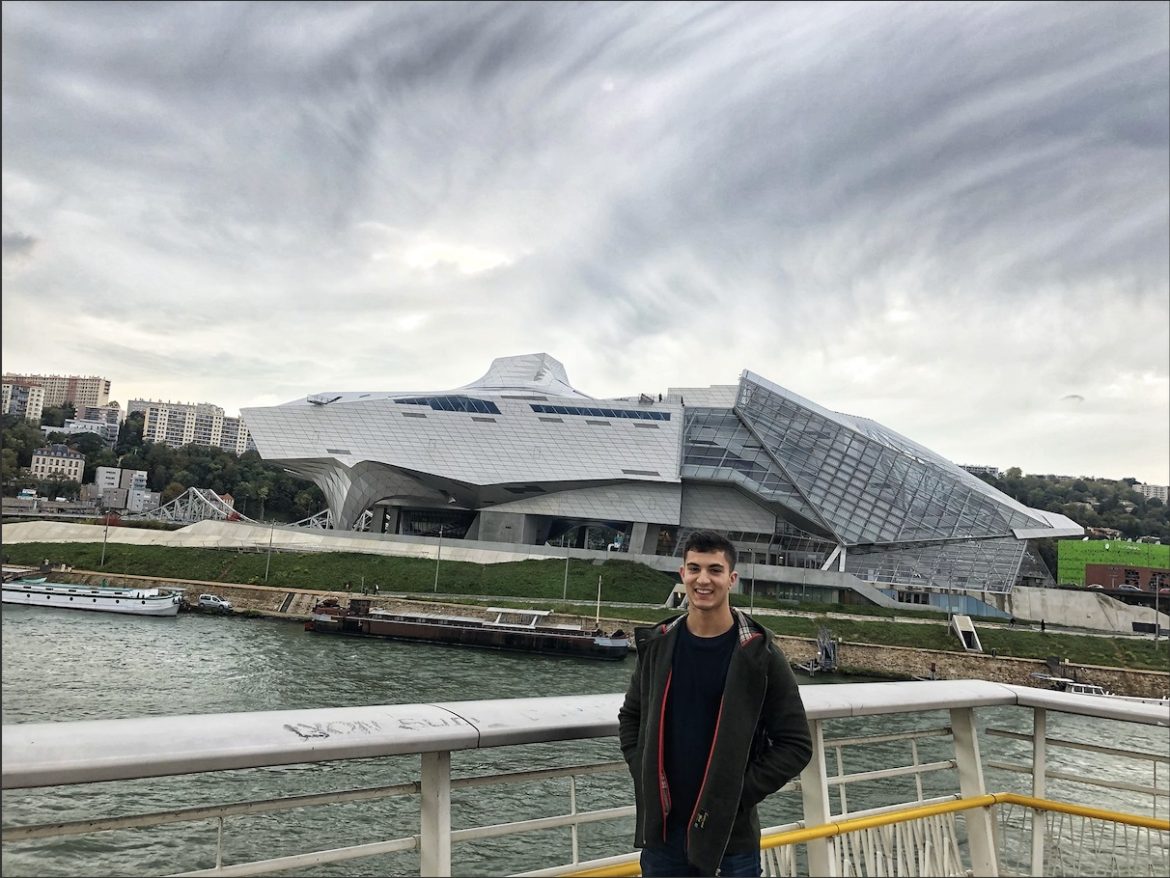 Juan Astegiano, who was recently recognized for his position paper written for the Model United Nations program, poses outside of the Confluence Museum in Lyon, France where the rivers Rhône and Saône meet. He spent the fall 2019 semester studying in France.

Wilkes University junior Juan Astegiano received the Outstanding Position Paper award from the 2020 Model United Nations Committee in New York. He is the first Wilkes student participating in the model U.N. program to win the honor.

Astegiano, who is from Buenos Aires, Argentina, is a member of the University’s Honors Program and is a triple major in political science, international relations and history. At the Model United Nations simulation, he was assigned to the General Assembly as a representative from Costa Rica. His paper focused on three issues: financing for development, information and communications technologies for sustainable development and disaster risk reduction. Students write the paper representing the viewpoint of the country their delegation represents. While they are at the conference students debate these issues with other student delegates as each role plays as a delegate from the country they represent. From there they write and vote on U.N. resolutions. Although the model United Nations assembly was not able to be held in March, student papers were evaluated and awards were presented.

The National Model United Nations is a nonprofit organization that advances understanding of the United Nations and contemporary international issues. The organization’s goal is to provide a better understanding of the inner workings of the U.N. as students build skills in diplomacy and compromise. The goal is achieved by holding a simulation of UN and how it works. Simulations are held once a year in three locations: New York, N.Y., Washington, D.C. and Kobe, Japan.

Schools participating in model United Nations simulations are assigned to be a delegation representing a particular country. Wilkes, which attends the simulation in New York City, represented Costa Rica. Each student is assigned to a committee at model U.N. and is required to submit a paper from the standpoint of the country.

Astegiano, who graduated from Wyoming Seminary in Kingston, Pa., was the recipient of a Bierly Fellowship at Wilkes, as well as a grant from the Wilkes Honors Program, which enabled him to spend the fall 2019 semester studying in Lyon, France, at the Catholic University of Lyon. While there, he studied in the Institute of French Language and Culture which allowed him to take intensive French courses to improve language skills. At Wilkes, Astegiano works in the International Engagement Office and also participates in a French speaking group and intramural volleyball.