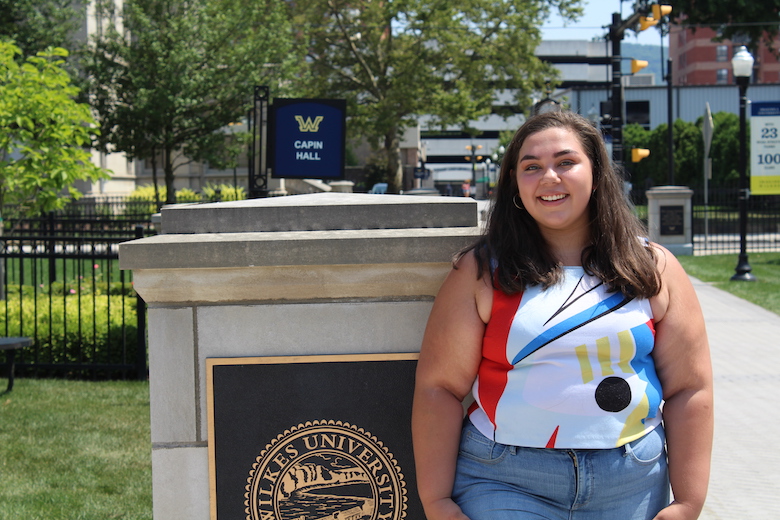 Wilkes sophomore Holly Jones has come full circle, from attending the Women Empowered by Science Camp in elementary school to serving as its student coordinator.

It’s been a full circle experience for Wilkes University sophomore Holly Jones who has gone from camper to coordinator of the Women Empowered By Science summer camp, also known as WEBS. WEBS gives campers the opportunity to investigate many areas of science through hands-on laboratories and activities.

“I first heard of WEBS in 6th grade when Deb Chapman (faculty of practice in biology) came to my elementary school,” Jones explains. The Mountain Top, Pa., native had a passion for science since childhood. When she attended the WEBS summer camp, Jones was set to be a Colonel in the future.

“I participated in both years of the WEBS camp. Then you have the option to volunteer in high school so I was one of the volunteers,” Jones adds. “Deb heard that I was coming to Wilkes and asked me if I would be interested in becoming the student coordinator.”

The answer, of course, was an enthusiastic yes from Jones who is studying biology. “I had the job before I completed any college credits,” she says laughing. But the excitement of coming back as the student coordinator for the camp didn’t stop when she accepted the role.

“I went to my own elementary school to recruit girls,” Jones adds, an experience which included pointing to her old desk in a classroom and being greeted with open arms from former teachers. As a student at Rice Elementary in the Crestwood School District, Jones completed an oil spill lab. Jones recalls this being one of the first hands-on experiences in science which sparked her interest. “It was a really big thing because the BP oil spill was in 2010 and in 2012 I was in the camp,” she notes. “There were real-life applications.”

With the camp gaining more participation since Jones was a participant, new changes arose. “The camp itself is growing. Every year, the volunteers keep coming back. We now have WEBS 1.0 which is the summer camp, and now there’s WEBS 2.0 and 3.0.”

WEBS 1.0 is designed for girls entering 7thand 8thgrade. WEBS 2.0 is for rising 9th grade girls who have successfully completed two years of WEBS Camp and wish to return to assist current campers in a hands-on role. WEB 3.0 is in its first year in 2019 and has been established for rising high school sophomores through seniors.

WEBS camp centers on the labs, which teach science concepts through experiences such as solr cooking and robots. The camp is adding activities in addition to the labs. Jones adds, “Because the camp typically ends at 3 p.m., instead of an optional dissection on Wednesday night, we now also have movie night for the girls and we’re touring the Sordoni Art Gallery because they have a STEM art exhibit which is super exciting.” During the STEM exhibition featuring Lit by Lyn Godley, campers will participate in hands-on activities which incorporate science into art.

Though Jones is excited to spearhead the event, she admits that a lot of planning and hard work is involved. “There’s so much work that goes into making a camp…you have to keep working on anything that is thrown at you.” In addition to scheduling and creating sessions, Jones also secures donations from community members.  Along with monetary and physical goods, female community members in science fields donate their time to discuss possibilities in science with the campers.

With a plan in place, Jones is ready to lead the camp that sparked her own joy of science. She says it also sparked her interest in Wilkes. “I did look at other schools but Wilkes and WEBS was it,” Jones says. “Being here every year as a volunteer—everyone was so nice.”

Though only just entering her sophomore year of college, Jones has her goal set for a future in medicine. Planning to study optometry, Jones is excited to explore more opportunities in science.

“It’s been a year. And I think of all the things that have happened and all the work it took. It’s so interesting to say it’s been a year but it happened so fast.”

As she reflects on her time as a camper turned coordinator for WEBS, Jones is getting to share the experience with her niece Raine during this summer’s camp as she too begins exploring the world of science.