As part of an on-going series introducing campus departments and the people who work there, News@Wilkes looks at members of the Public Safety Department. Meet communications officers Michelle Donohue and Jill Lewis, who man the communications desk in the department. In addition to facilitating calls and requests received by public safety, the two also monitor the security cameras located throughout campus. 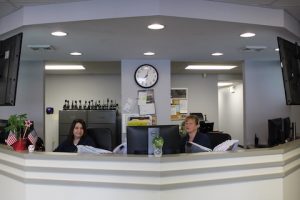 If you could live anywhere, where would it be?  “Hawaii. It looks so serene and relaxing… It’s like my dream vacation.”

If you could have a super power, what would it be? “Read people’s minds.”

Fun fact about you: “I always liked swimming — it was a big thing growing up for me. And being with my (five) grandchildren.”

If you could live anywhere, where would it be? “On a beach somewhere.”

Fun fact about you: “I’ve never gardened before but I did this year and it was plentiful. They actually called me the farmers market here because I kept bringing in stuff.”

Research Helps Pre-Med Student Stand Out from the...