How do you want to be remembered? It all started with a question.

Wilkes University student Alec Levin attended a youth leadership conference in high school where a motivational speaker asked, “How do you want to be remembered?”

The answer was Actions Over Words, the clothing line Levin created before he came to Wilkes.  The company’s name is Levin’s definitive answer to the initial question. “I wanted people to do something today instead of putting it off until tomorrow,” he said.

Levin had reservations about starting college and keeping up with his business. He is also a member of the Wilkes University Men’s Tennis team, and credits the University and his busy schedule for helping him grow as a person and as a company. 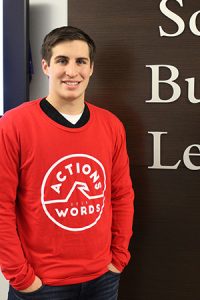 Levin poses in The Jay S. Sidhu School of Business and Leadership in his finished product.

Actions Over Words launched in March 2015, when Levin was a junior in high school. He and his dad came up with the company’s design, a wave concept, to represent his Cape May, N.J., roots and give the line a beach-feel.  The apparel features the wave with the words “Actions Over Words” surrounding it.

However, the finance major wanted the line to be more than just clothing. He decided to donate $5 of each to a different charity to “help make this world a better place to live.”

“I have loved finance and stocks my whole life, I never though I would be in the clothing business” Levin said. “But I saw there is a social concept behind businesses now, a self-selling concept.”

In December 2015, Levin chose Family Promise of Cape May County as his charity and pledged to give $6 from each purchase to the organization.

“I wanted to do something for Christmas, help people buy presents or what not,” he said. “A friend, who was home from LA, and I made a documentary about Cape May County. People know Cape May as this beautiful place, but don’t know that five miles south or 10 miles north, where people live all year round, there is extreme poverty.”