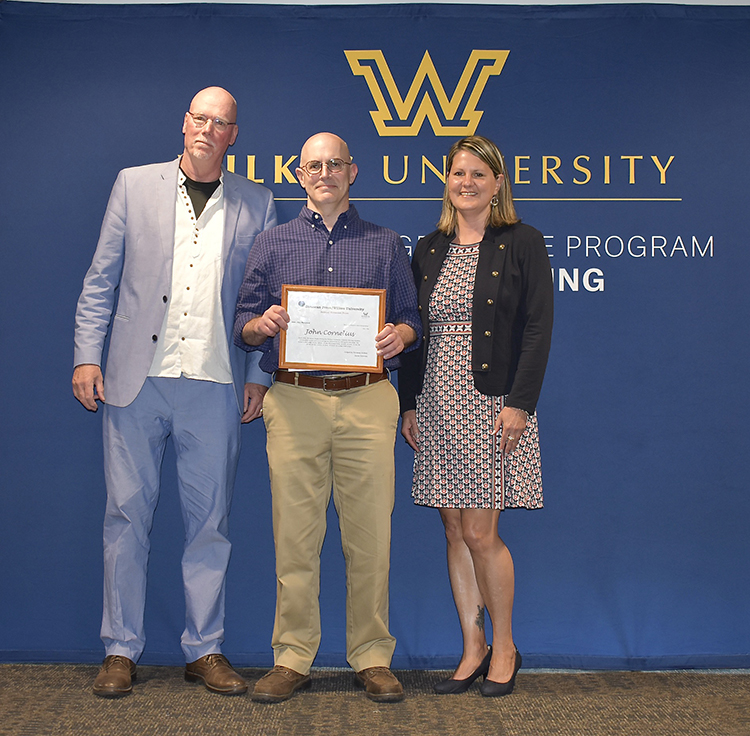 John Cornelius of Nescopeck, Pa., was awarded the Etruscan Prize during the Wilkes University Maslow Family Graduate Creative Writing Program residency on June 25. The Etruscan Prize is awarded each year to a member of the Wilkes creative writing student community who submits one page of any genre (prose, script, poetry or play) that sings. This was the 12th consecutive year Etruscan Press awarded a Wilkes University Creative Writing graduate student for their writing excellence.

Cornelius’s submission, “Second Marriage,” was the prize winner. This was the fifth year the Etruscan Prize was awarded for a work of fiction. Prize recipients from prior years were awarded for works of fiction, memoir and poetry. Cornelius is pursuing his Master of Arts in Fiction in the Maslow Family Graduate Program in Creative Writing. Wilkes faculty member Nancy McKinley has served as Cornelius’s mentor.

Etruscan author Karen Donovan judged the award. Donovan commented about Cornelius’s submission: “‘Second Marriage’ is a work of very short prose, as compact and evocative as any poem, that pops open a haunted room where events occur in a way they have never quite occurred before. The narrator, both the subject of and witness to this haunting, fastens on primal elements – sun, moon, forest, stars – to report its effects. The room stays suspended in magic time as the telling accumulates. In one last gesture, a foot touches down, and what is at stake reveals itself. The beauty of the craft here is that so much is made to happen in such a small space. Every sentence has a twist in it. Every idea is exquisitely tethered to the concrete. The images resonate and expand, pushing the room out until it is much bigger on the inside than it looks – big enough to summon ‘impossibly large owls’ that take up residence in a reader’s mind for a good long while.”

Donovan is the author of Aard-vark to Axolotl (Etruscan Press, 2018), a collection of illustrated short prose, and two collections of poetry, Your Enzymes Are Calling the Ancients (Persea Books) and Fugitive Red (University of Massachusetts Press). Planet Parable will be published as part of Trio, an Etruscan Press Tribus imprint, in August. Donovan works for a social enterprise accelerator in Providence.

Etruscan was one of four finalists for the 2021 AWP Small Press Publisher Award. Three works from Etruscan’s collection of poetry were named finalists for the National Book Award and another was named to the Longlist (the NBA’s “Top Ten” in poetry). Other titles are recipients of the Poetry Society of America’s “First Book Award,” the Foreword Reviews Book of the Year Award, and PEN Oakland’s “Josephine Miles Award.” Three poems published by Etruscan were selected for Best American Poetry. Most recently, titles published by Etruscan Press were awarded the Theodore Roethke Memorial Poetry Prize, Mass Book Award, nominated for the Hurston/Wright Legacy Award in Poetry, the Poet’s Prize, named a finalist for the Foreword Reviews Book of the Year Award, Housatonic Book Award, Helen Smith Memorial Prize for Best Book of Poetry, and longlisted for the PEN/Diamonstein-Spielvogel Award for the Art of the Essay.