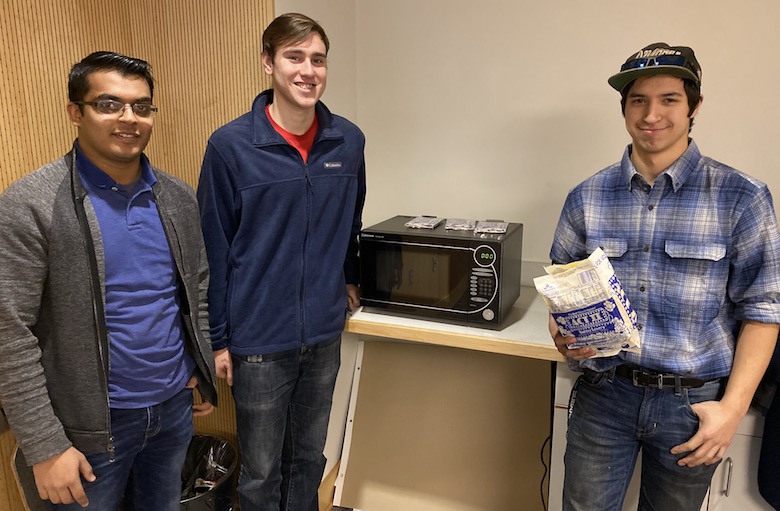 Showing off the fruits of their labor -- a bag of microwave popcorn -- three Wilkes University mechanical engineering students show off the microwave that they reverse engineered and successfully fixed. Pictured from left are team members Jay Patel Jr., John Seasock and Alex Abad. Not pictured: Azzam Alshuwayi

Entering Room 102 in Cohen Science Center, the air was fragrant with the by-product of one student team’s successful project: repairing their professor’s broken microwave. Once repaired, its glass cooking roundtable again turned 360 degrees, producing a perfect bag of microwave popcorn.

The project was one of six undertaken by teams of mechanical engineering students registered in the upper-level technical elective class. Their mission: reverse engineer common household items.

In layman’s terms, reverse engineering meant the student teams had to take apart items to see how they worked and successfully put them back together — with no extra parts left over. In a few cases – like the microwave – they were challenged to make a repair. Students were required to make CAD drawings of all the object’s component parts and two-dimensional drawings of the deconstructed objects. Besides the microwave, teams chose a Sears Craftsman power drill, a mini food processor, a computer printer, a portable heating fan and a Johnson outboard motor. The assignment helps them to build problem-solving skills crucial to mechanical engineers.

“It takes them back to why students might have gotten into engineering in the first place,” Bednarz says. “When they were kids, they might have taken something apart and put it back together to see how it works. That’s how it starts.”

It was clear that the early curiosity that led the students to major in engineering was still present as they presented their projects.

Members of the microwave team were junior mechanical engineering students Alex Abad, Jay Patel, Jr., John Seasock and Azzam Alshuwayi. They made it all sound so simple.

“It took us about 30 minutes to find out what was wrong and ordered the part off Amazon,” Abad said. The problem was with the AC synchronous motor.

“The (motor’s) connector was a little bigger on the new one than the old one,” Seasock says. “So Alex filed it down and it fit.”

Although the team sounded almost nonchalant, their PowerPoint presentation revealed the detailed work that went into the project. It included meticulous CAD drawings and a slide of complex calculations about the number of rotations the inner motor needed to make for each time the cooking turntable revolved.

The motor won’t be taking to the high seas any time soon: The team was not able to repair it. But their presentation included detailed 3D models and a thorough review of its inner workings.

This team’s subject came directly from the dollar store. Their presentation included an exploded view of the chopping device’s inner workings and an analysis of the amount of torque needed to enable the blade to chop food. (Torque is the measure of force times distance that can cause an object to rotate around an axis.)

The fan, which doubles as a portable heater, was no match for the three Wilkes mechanical engineering students. “Did you have to hot glue it back together?” someone asked. The reply: “No. We were able to use the two screws it came with.”

“When I first opened it, the gears went everywhere and I thought, ‘All right. We’re not putting this back together,” joked Kyle Bentz. The group persisted and successfully reverse engineered the drill. While they were at it, they replaced the broken clip on the battery case by creating a model and 3D printing a replacement.

Project: HP Officejet 6500A Plus (printer)

The team originally thought they were repairing a printer because Hollister’s roommate had told her it didn’t work. “We found out that all that was wrong was that it needed a power cord,” Hollister said wryly. Although they had nothing to fix, the team successfully took apart and reverse engineered the printer. Among their findings: the ink cartridges are designed so that they drain at the same rate, regardless of the color used. “The printer is like a giant Rube Goldberg machine that re-sets itself,” Dwyer observed.

The Rube Goldberg analogy is apt: for their final project this semester, the students in this class will be designing their own Rube Goldberg devices, Bednarz said.