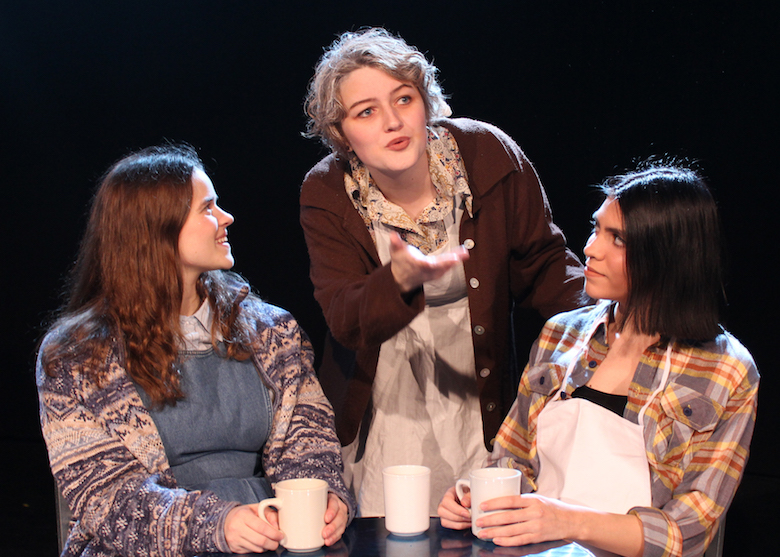 The past and the future of "The Spitfire Grill" is discussed by, from left, Shelby (Katelyn Sincavage), Hannah (Maddison Black) and Percy (Marcy Ledvinka) in Wilkes University's production of the award-winning musical, directed by Jon Liebetrau, assistant professor and director of theatre.

Wilkes University Theatre presents the award-winning musical, “The Spitfire Grill.” Performances will take place on Feb 20, 21, and 22 at 8 p.m., and on Feb. 22 and 23 at 2 p.m. All performances are at the Dorothy Dickson Darte Center, 239 S River St, Wilkes-Barre. General admission is $15, students and seniors are $10. Admission is free for all Wilkes students, with a Wilkes University ID.  The production is directed by Jon Liebetrau, assistant professor and director of theatre.

The show features music by James Valcq and lyrics by Fred Alley, who both wrote the book. Based on the film by Lee David Zlotoff, it follows the story of recently paroled convict Percy Talbott, who is looking for somewhere to start over, and rural Gilead, Wisc., seems just the place. She takes a job at the Spitfire Grill, a crumbling diner where the townsfolk congregate and gossip, run by a feisty widow named Hannah. Hannah has been trying to sell the diner to escape from the painful memories it holds, but the property has been on the market for a decade with no takers. Soon, Percy hatches a plan to hold a raffle for ownership of the Spitfire Grill—for $100 and an essay about why they might want the grill, anyone can enter the contest. As the contest entries begin to roll in, Percy starts to realize that she’s not the only person in Gilead with a history.

The musical was the recipient of the 2001 Richard Rogers Production Award, presented by the American Academy of Arts and Letters. When it debuted off Broadway in 2001, it also was nominated for the Outer Critics Circle, Drama League, and Drama Desk awards.

In The Lab With With Drs. Ellen Newell and Jennifer Thomas, Psychology

Zbigniew J. Witczak, Ph.D. of Wilkes University’s Nesbitt School of Pharmacy Appointed to Editorial Board of the International Journal Antibiotics