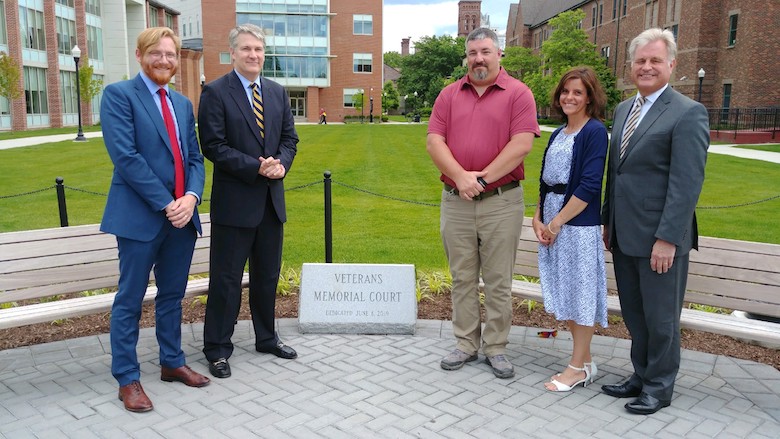 The dedication was held on June 6, the 75th anniversary of D-Day.

“We must always remember the brave men and women who paid the ultimate sacrifice for our freedom. Those who have served and continue to serve our country deserve our deepest gratitude,” said Leahy. “A courtyard in the center of our campus will also keep veterans in the center of our hearts. It is my honor to dedicate Veterans Memorial Court at Wilkes University.”

Local coverage of the dedication included:

Photos by The Citizens’ Voice:

A ceremony was held Thursday at Wilkes University to dedicate a new Veterans Memorial Court on the school’s campus in Wilkes-Barre.

The ceremony took place next to the flagpoles in the university’s Campus Gateway in the Fenner Quadrangle. It was held to coincide with the 75th anniversary of the D-Day landings in Normandy during World War II.

WILKES-BARRE, LUZERNE COUNTY (WBRE/WYOU) — A special ceremony was held today in Luzerne County, honoring and remembering the sacrifices made on the beaches of Normandy 75 years ago today.

Wilkes University dedicated a veterans memorial court on the anniversary of the D-Day invasion. The significance of that day in history was not lost on those in attendance.

It was given the pomp and circumstance that it deserves, a brand-new veterans memorial court at the very center of the Wilkes University campus.

“In the end over 150,000 troops landed on June 6th including over 4,000 that lost their lives. By the end of June nearly one million Allied troops were in Europe and over two months later Paris would be liberated,” Wilkes University Global Cultures professor John Kuiken said.

Wilkes grad and Army veteran Kelly Egan served two tours of duty in Iraq. He told the crowd that the fight for freedom never ends.

“I think it’s important that new generations remember what the old ones did and are willing to step up and continue that struggle,” Egan said.

This memorial is also about bringing people together.

“Someone said if every American had the privilege of walking on the beaches of Normandy I think the tenor of our political world would be a lot different. I think that’s true. If we can’t do that, let’s remember and celebrate what happened 75 years ago,” Wilkes University president Patrick Leahy said.

Also here were Wilkes students from Panama, who are just learning about D-Day and what it means to not only Americans, but people all over the world.

“I think it’s an amazing day. We recognize their sacrifice of those men in the military made in 1944 and learn more about American history,” student Jesus Rios-Panama said.

“To know about the culture and history of America and World War Two and giving honor to all these people who fought who sacrificed for the liberation for freedom of everyone,” student Arlyn Rivera said.

Wilkes University officials say they wanted to place the veterans memorial court at the very center of the heart of the campus so it can be seen by as many people as possible.

WILKES-BARRE, Pa. — Wilkes University honored all veterans on the anniversary of D-Day with the dedication of a new monument.

A ceremony was held at Veterans Memorial Court on the campus in Wilkes-Barre.

The Air Force ROTC Color Guard presented the colors and several people spoke at the ceremony about the sacrifice our veterans made especially World War II veterans.

“For those men and women, no cost was too great to defend the principles of liberty and freedom. Fighting alongside our allies they fought not just to win a war, but to build a better future,” said Jonathan Kuiken.

The new Veterans Memorial Court located at the center of campus features plaques, benches and flags where students can relax and reflect.

WILKES-BARRE — One person recounted how graduates had died serving their country. Another noted it was not victory — by D-Day, the only question was how to win — it was the promise of liberation that made D-Day so pivotal.

A veteran cited the need to serve even after leaving the military: “If we don’t, who will?”

Then, Wilkes University President Patrick Leahy read from a 2014 essay by Douglas Brinkley in a LIFE: D-Day publication commemorating the 70th anniversary of the Normandy invasion.

“The following day, June 7, newspapers were full of mind-boggling factoids and statistics about how D-Day had succeeded. One number that didn’t appear was 36,525.”

The number of planes? Ships? Soldiers on Omaha Beach?

It is the number of days in a century, and Brinkley argued that in the 20th century, none were more important than June 6, 1944. All other nominees, Leahy quoted, “flatten when one asks, ‘What if D-Day had failed?’”

Wilkes combined the D-Day commemoration with the dedication of the university’s Veterans Memorial Court on Thursday morning under a mix of clouds and sun, the breeze strong enough to keep the flag flapping after members of the school’s ROTC detachment raised it in the center of the Fenner Quadrangle.

The location, Leahy said, was deliberate. “This is both the literal and figurative heart of our campus,” he noted, which means nearly every student, faculty, staff and visitor are likely to walk past the flags on one side and stone veterans marker on the other. “They might,” he hoped, “stop just for an instant and remember the people who served.”

“Let’s let the examples of veterans past, present and future inspire our own acts,” he added.

Vice President of Student Affairs Paul Adams opened the ceremony recalling two university graduates, one who died from crash injuries sustained after flying his damaged aircraft away from a populated area rather than ejecting, the other who joined the Army Rangers despite repeated rejections due to athletic injuries and served in Afghanistan for six tours before being killed near the end of the last one.

Adams also recounted a visit to the the Utah Beach invasion site, where he was at first disturbed to see his young children laughing and playing in the sand and water where soldiers died.

He quickly changed his mind.

“It was now a place of laughter and joy. They fought for that,” Adams said.

Jonathan Kuiken, assistant professor of global cultures, said most leaders believed the German war machine “was broken” before D-Day, and that the United States could have spared lives by opting to arm and equip the Soviets to finish the job, but that was not the goal in Europe.

“The promise that we were coming to set them free had not yet been met,” he said. The Allies invaded to fulfill that promise: “They fought not just to win a war, but to build a better future.”

Army veteran Kelly Egan, a 2019 Wilkes graduate, was brief in giving a veteran’s perspective. “Service doesn’t stop when our service ends. We need to continue to give to the community that gave so much to us.”

Leahy finished his talk by quoting Dick Winters, the central figure in the TV series “Band of Brothers,” which told the saga of Easy Company’s journey from D-Day through the war.

In a clip aired as part of the fictionalized story, the real Winters recalled a question a fellow veteran was asked by a grandson: “Grandpa, were you a hero in the war?”

The answer, Winters said, was “No, but I served in a company of heroes.”

Adams closed the ceremony by quoting from a “prayer” President Franklin D. Roosevelt offered in a radio address on D-Day.

“They fight not for the lust of conquest. They fight to end conquest,” he intoned.

This Type of Yoga is the GOAT