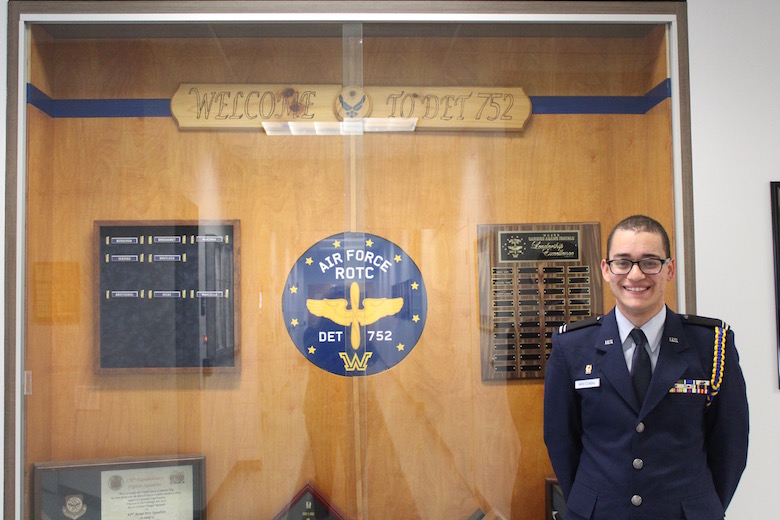 Wilkes business management major Jason Aristizabal is a student leader in the university's Air Force ROTC detachment, the admissions office and as an E-mentor.

Jason Aristizabal of Lansdale, Pa., wakes up before 6 a.m. to make sure everything is neatly in place and he is ready to lead his ROTC Detachment. Aristizabal, a junior in Air Force ROTC Detachment 752 at Wilke,  has his sights set on a future with the armed forces. As he walks about campus, ROTC cadets stop to salute him, and he responds with a firm, yet always polite, “at ease.”

The business management major decided to serve his country after Sept. 11, 2001.

“I wanted to join because my uncle worked in the World Trade Center and he survived that day, which to me was a blessing from God that he took care of my family,” Aristizabal said. “I felt that somebody in my family had to pay that back and take care of this country.”

Aristizabal will graduate from Wilkes and enter the Air Force as a second lieutenant. His job in the Air Force will be decided within the next year, and after graduation, he will serve four years of active duty and four years as a reserve.

“You list out what jobs you want. The Air Force is going to take that list and they are going to look at what you want and what they need and they are going to try to pick the best to accommodate both,” he explained. “I am thinking about going into intelligence or something utilizing my degree in business and finance.”

Though Aristizabal knew he wanted to join ROTC, he didn’t have a specific university in mind until he visited Wilkes. He visited after he saw it its ROTC program listed on the Air Force’s website, but once he toured the University, Aristizabal credits its students for creating the ultimate college experience.

“There is nothing that influenced my decision to come here more than the people that I met on my first day at Wilkes,” he said. “That’s not even the people who are trying to convince you to come to school here. It’s the students who are there, who you bump into, who you meet at Starbucks. When I came up here to visit the university and when I met my now best friend, Lt. Alex Herrington, he completely stopped what he was doing to accommodate me and help me. ‘Hey, you look like you’re new here, what’s going on?’ It was after meeting him and getting to know the people here that I was like, ‘I love Wilkes.’ ”

That was five years ago and he hasn’t looked back. He is still best friends with Herrington and continues to be grateful for the friendships he has made, especially in ROTC. The caring atmosphere of a small university like Wilkes carries over to the program.

“Wilke’s ROTC is very different from other big schools where there are 500 cadets or so,” he explained. “When you come here, someone will take you under their wing and somebody will help you.”

Aristizabal continues the tradition that he saw on his first day at Wilkes of welcoming new students. He is an E-mentor, a lead ambassador for the admissions office and the candidate training officer for the Arnold Air Society in ROTC. All of these extracurricular activities require leadership and guidance to underclassman on campus. An E-mentor helps new students get acclimated to Wilkes.

“I am their first friend as well as a resource,” he said. “You’re there for them when they have a question, when they need help in class, things like that. I love the relationships that I form with students. This is my second year as an E-mentor and a lot of the mentees I had from my first year doing it, I’m not their mentor anymore, but I still consider them my close friends.”

His campus involvement extends beyond his detachment. As a lead ambassador at the admissions office, Aristizabal gives tours, makes phone calls to prospective students and their families, helps keep administrative information up-to-date and teaches other student ambassadors how to perform the job. He joined the admissions team as a freshman and worked his way up to becoming a lead ambassador.

Aristizabal also is a member of the National Society of Leadership and Success and the Arnold Air Society. The National Society of Leadership and Success is the nation’s largest leadership honor society.  Students are selected by their college for membership based on either academic standing or leadership potential. Aristizabal and members meet to talk about academic and life goals and how to achieve them. The Arnold Air Society is an honors society within ROTC that is focused on building strong officers for the United States Air Force.

“I am the candidate training officer for the Arnold Air Society,” he said. “There is a candidacy course every fall semester. It’s a 10-week training course where they learn a lot of critical thinking analysis and a deep understanding of concepts that are learned in ROTC. I am in charge of getting them ready to be in the organization.”

Aristizabal is also a part of the honor guard in ROTC. He holds the flag and rifle at Wilkes’ football games and events such as the most recent Veteran’s Day ceremony and the flag raising event in the Fenner Quadrangle.

Aristizabal continuously tries to make the Wilkes experience better for everyone around him and he hopes that will be his legacy after graduation.

“I personally try to take my candidates and my flight mates under my wing,” he said. “I think we see that all the time here at Wilkes.”