Engineering Students Are On Track With Running of the Trains

Eight students sat at intervals along HO-scale train tracks, computers in front of them, circuits plugged into the tracks next to them. They were members of John Gilmer’s Microcomputer Operation and Design class. Each student was assigned two sections of the track and a switch – although one, Ryan Marshall, had two switches for good measure.

Their assignment had included designing all the track driver and sensor electronics. Now it was being put to the test, as they were required run two trains in opposite directions – passing control from one student to the next, without mishaps. They had programmed microprocessors to be controlled via computers, moving the trains along the tracks. It sounds simple – but the students in the fall 2018 class had an extra challenge when they had to deal with a completely new processors that required them to start their programming over again more than halfway through the semester. Running the trains was the final project for the course, accounting for a significant part of their grade. 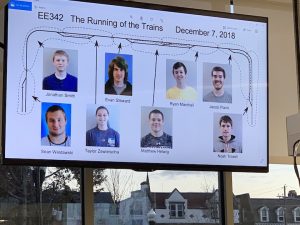 A board in the Mark Engineering Center’s flex lab showed which student controlled which section of track.

On the day of the event, tracks ran the length of the flex lab in the Mark Engineering Center. A leaderboard of sorts was projected on screens around the room, showing which student was responsible for which sections of track. Photos of the eight junior and senior electrical engineering students were displayed in the order in which the trains would run: Sean Westawski, Jonathan Smith, Taylor Zawierucha, Evan Steward, Matthew Helwig, Ryan Marshall, Jacob Plank and Noah Troxell. 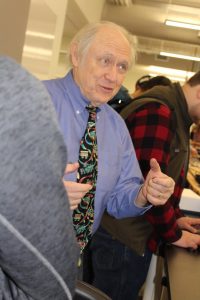 John Gilmer, professor of electrical engineering, has overseen the Running of the Trains at Wilkes University for two decades.

Overseeing it all was Gilmer, professor of electrical engineering and train enthusiast, wearing a tie printed with colorful locomotives. For two decades, he’s been holding The Running of the Trains, an event that requires students to apply what they have learned in his class to a real challenge. In the end, the students prevailed, running the train on their section of track before transitioning it to the next student. It’s not easy, Gilmer explains. “As the locomotive moves from one section of track to another student’s section, it simultaneously draws power from both, sometimes in opposite directions, and presents possibilities of either short circuits or a destruction contest between the students’ track drivers, if not carefully handled,” he explains. “That makes proper grounding and the track voltage sensors important.  We usually have a column of smoke before this event is over, but that didn’t occur this time!”

The students acknowledged it was one of their toughest assignments ever.

“Building the circuits can be challenging,” Zawierucha said when it was over. “One wire in the wrong spot can throw everything off.”

At the other end of the lab, Troxell was quick to agree that wiring can be tricky – especially when voltage of the board and the voltage of the HO train are quite different. “The train runs at 16 volts, but the board is 3.3 volts,” Troxell said, shaking his head at the memory of what can happen if you confuse the two.  It has happened to him in the previous day’s rehearsal for the event, when the higher track voltage killed the microcontroller.

He noted that one aspect of the project didn’t involve technical prowess. “You have to communicate effectively with your neighbor to make it work,” he said, nodding at Jacob Plank, the next-in-line down the track.

Plank was quick to say that the most illuminating part of the experience was realizing that the solution to the project was something they had to discover on their own. “You’re not going to be able to go to a textbook for the answer. You have to work through a lot of different problems yourself,” Plank said.

And that, he and his classmates had realized, was not child’s play – even if they were working with toy trains.

Gilmer was proud of his students’ work. Having new processors added to the mix mid-semster slowed the group down a bit, he noted, saying that students usually have time to develop their projects more fully. He noted that one, Sean Westawski, created a point-and-click application to run under Windows to control the train, replacing the text command interface used by the others. Usually, Gilmer said, there are more of those types of innovations. 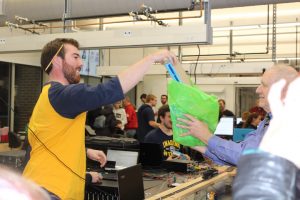 At the end of the event, Gilmer presented each student with their own model railroad car, a tangible memento of a challenging class. He has his own memento of nearly two decades of The Running of the Trains. It’s a yellow Union Pacific electronic diesel, the first HO train locomotive Gilmer ever owned, given to him when he was a teenager.  It’s now retired from the run, but Gilmer proudly showed it to attendees.

For more about The Running of the Trains, see the article in December 8 edition of the Times-Leader,  here