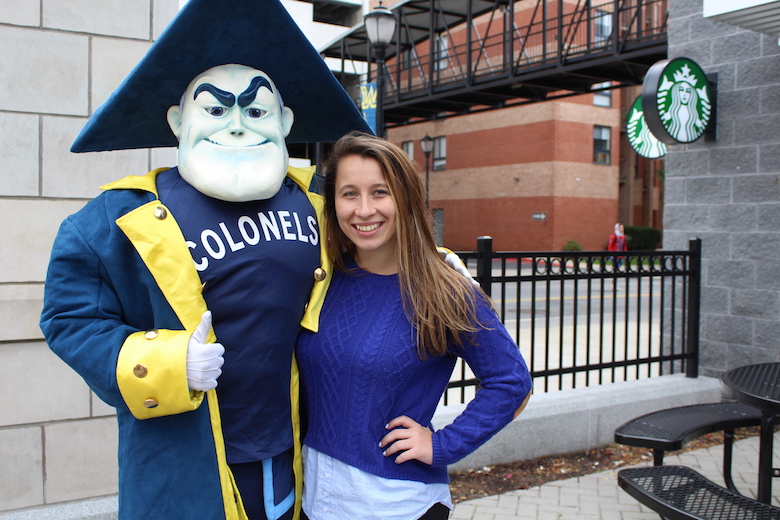 “Being an athlete and student is both full-time.  It takes a lot of time management to do both,” the Poughkeepsie, N.Y., native said. “We have a strong academic foundation on the women’s soccer team and the coaching maintains that.”

As if that wasn’t enough, she’s had leadership roles on campus, serving as the Kirby Scholar of marketing and the CEO of Zebra Communications, the student-run public relations firm.

Speranza transferred to Wilkes when back-to-back concussions sidelined her while playing soccer as a freshman at another university. “I wasn’t cognitively capable of keeping up with everything,” she explains. After taking time to recover, she enrolled at Wilkes in spring 2015 and hasn’t looked back. “The soccer coach from Wilkes told me to trust the process and it would help me find the way. And I’m so glad I did it.” 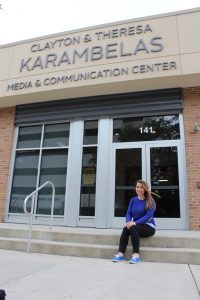 “It’s crazy because I’ve had to cram everything into the last three years,” she explained. “I didn’t declare a major until my sophomore year. Gretchen Yeninas (associate dean of student affairs) was my advisor and she was the best guide to put me in the right direction.”

As a first generation college student, Speranza notes her appreciation for the campus community for students who are the first of their family to attend college. After being asked to speak at the Gateway to the Future campaign kick-off during homecoming, she explains getting to share her journey with members of the community who make it possible was an honor.

Now, the knowledge she’s gained in the classroom has helped to her to land internships that eventually took her around the country and then to Great Britain. Her first internship with the Greater Wilkes-Barre Chamber of Commerce in her sophomore year gave her connections which set her up for success. It helped her to land an internship with United Sports Academies. United Sports Academies seeks to connect people through sport and is dedicated to providing sports clubs, teams, and organizations with the best possible, highest quality international sports experience, both on and off the field.  That internship combined her interests in sports and communications.

“That allowed me to go to Delray Beach, Fla., and even Manchester, England, as a sports travel and tournament management intern at United Sports Academies. I got to do a lot with soccer,” she explained. “Both of those internships helped me get leadership roles with Zebra Communications, which was really cool. Then through that, I was able to become the Kirby Scholar of marketing.”

As CEO of Zebra, Speranza has major responsibility for coordinating all of the agency’s work. “I handle all the logistics, the backgrounds—I’m the behind-the-scenes girl—I’m helping out with a lot of event planning.” She worked her way through the ranks, with the encouragement of emeritus professor of communication studies, Jane Elmes-Crahall. “She encouraged me to fulfill those communications co-curricular hours and before I knew it, I was doing the bunny hop at 5 a.m. for the Children’s Miracle Network Easter Egg hunt on local television and suddenly I was a member of Zebra.”

Speranza also serves as the Kirby Scholar of marketing. The Kirby Scholars Program provides current Wilkes undergraduate and graduate students with hands-on experience in their chosen discipline while serving as a resource for businesses at the Wilkes Enterprise Center. As the scholar of marketing, she meets the with marketing department, handles content distribution for the Allen P. Kirby Center for Free Enterprise and works with clients.

Her bunny-hop days may be over, but there is still fun to be had in the field. “I’ve learned that there is more to public relations than just working in a firm in the city like I had planned to do originally.”

Now, with graduation months away, Speranza is looking towards the future. She’s weighing her options, considering both graduate school for an MBA or entering the communications field via a job in sports marketing or a travel firm a major city. “There’s a bunch of opportunities out there, it’s just a matter of seizing which one,” she said.

Reflecting on her time at Wilkes, becoming a Colonel has helped her reach her goals. “I don’t think I could have done what I wanted to do at a different university,” adding, “At Wilkes, it’s such a community feel, it’s a tight-knit campus with endless opportunities.”

Update: Speranza graduated in May 2019. She is currently serving as the marketing assistant at HVEA Engineers in Beacon, N.Y. where she completes marketing and advertising initiatives as well as writing grant proposals and company newsletters.

April 7, 2022
This form needs Javascript to display, which your browser doesn't support. Sign up here instead