Wilkes senior Romeo Rosario marches to the beat of his own drum—and now he’s leading other students as the head drum major of the Marching Colonels. “With music, it’s been part of my life since I was young. Being Puerto Rican…I’ve grown up with music and it’s probably led me to where I am now.”

The Allentown, Pa., native is a first generation student, the first in his family to complete a four-year degree and has used that to fuel his drive to succeed. Whether it is leading the marching band, navigating campus as the logistical coordinator for orientation, or serving as the president of Bacchus, the student-run club dedicated to students’ health and well-being — Rosario is up for anything. 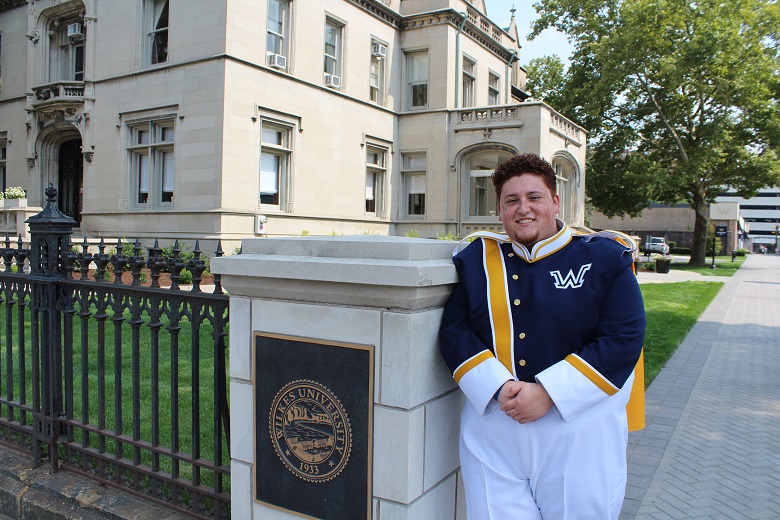 “Wilkes was the land of opportunity for me. Everyone treated me like family, treated me with respect,” Rosario says. “They knew I was a first-generation college student and they knew I needed time to blossom and become the leader they knew I could be. I didn’t expect to be in all these different clubs and do all these things, but being here and working with all the great people I’ve worked with led me to that point.”

Rosario also credits the support of his mother and brother for getting him to where he is now. Through their encouragement, he was able to find his home at Wilkes. During his time at Allentown’s Louis E. Dieruff High School, Rosario was introduced to various universities, but his mind was set on becoming a Colonel. “They had a program where you could go to state schools… but I kept coming to Wilkes,” he says. “If there was a tour, I would be here. I talked with [Wilkes] admissions counselors and they kept checking up on me. They made it seem like they wanted me to go here and that really pulled me in…. they’re seeing something in me that I’m not seeing.”

Now as he enters his final year on campus, he can see the leader he has become, too.

“One of the biggest things Wilkes has taught me is to become a leader,” he says. “It actually gave me responsibility.” That responsibility carried through an internship he landed this summer with the New Dawn Partial Hospitalization Program in Edwardsville, Pa. New Dawn provides children with treatment for a variety of mental health disorders while being in a classroom-like setting.  As a psychology major, Rosario was able to apply his classroom experience.

“I wasn’t sure what to expect,” he explains. “You go into class and they tell you all these things but to go and see it applied was kind of nerve wracking because I was responsible for a 5 year old.” With the organization, Rosario worked with five children aged 3 to 5 on behavioral etiquette.

Rosario entered Wilkes as an undeclared science major, but with the help of faculty, he’s made his way. “I had awesome professors over at University College who helped me find my way and try things out.”

Now Rosario is looking into masters’ degree programs to continue his education, but he isn’t done with music yet. “I love to play music, it’s the universal language,” he states. Rosario encourages his band mates to take whatever they are feeling before they step out onto the field and to work it out and “see it as an escape.”

With all these experiences stacking up, Rosario is setting his career sights on the world of clinical psychology but is open to anything. “I like working with kids but I would enjoy working with families,” he explains. “I feel like people have trouble trying to understand their own families. So trying to help them figure out a solution and discover their niche is the goal.”