What Wilkes Did On Its Summer Vacation 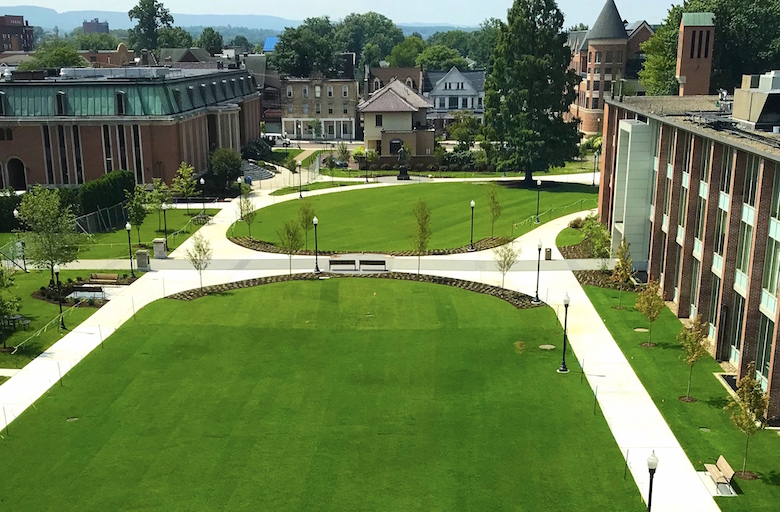 Summer was no time to snooze at Wilkes. The diversity of the activities, people and events that highlighted summer at the University might surprise those who think that a college campus is sleepy in summer. Members of the University community are fulfilling President Patrick F. Leahy’s charge to make Wilkes a year-round campus.

In the time-honored tradition of students writing about what they did on their summer vacation, Provost and Senior Vice President Anne Skleder’s remarks at fall convocation highlighted what happened on campus while most faculty and students were absent. Skleder commented, “It was an incredible summer— on campus, around the corner and across the globe, and in our on-line Wilkes community.  It was not a sleepy community nor a quiet campus, nor did our faculty, staff and students spend all their time vacationing (In fact, after gathering the information to share, I am not sure how they spent ANY time vacationing).”

Using a “by the numbers” approach, Skleder outlined some of the highlights of summer 2018 at Wilkes.  Some of the snappy statistics she shared included:

482:  The number of course sections offered (161 for undergraduates, and 452 graduate-level classes and 30 in the intensive English program.)

647:  The number of unique undergraduate students registered for summer classes.

2,120:  The number of unique graduate students registered for summer classes.

397:  The number of individual prospective students visiting campus, not including family members.

100: The number of students in the Doctor of Education program who attended the on-campus residency. They hail from eight states, five continents, and over a dozen countries.

80:  The number of items on Charley Carey and his team’s “to do” list at its highest point this summer.  “And, you all know, these weren’t small projects!” Skleder quipped.

69:  The number of students in pre-school through grade six who benefited from the Reading and Arts Camp at Wilkes.

51: The number of Panamanian students on campus by the end of the summer.

49:  The number of students traveling and presenting at national meetings and conferences.

40:  The number of undergraduate  students conducting research on campus this summer, just in the College of Science and Engineering

25: The number of mentoring grants awarded to faculty and student teams

20: The number of students in our NINTH cohort of teachers from Panama

4:  Number of Environmental Engineering students spending the summer at a Panamanian partner University on exchange.

Other highlights from summer 2018 included:

Nearly 700 first year students set foot on campus this summer as the class of 2022 to attend orientation. Offered in two sessions, July 1- 2 and July 15-16, students attended orientation to get acclimated to campus, meet with advisors, get to know their peers, and participate in community service. Students also had the option to attend the Office of Student Development’s Pre-Orientation Adventure Day, held in both sessions the day before orientation activities started. Connecting with the Wilkes Adventure Education (WAE) staff, students were able to go rock climbing, swimming, boating, and hiking. On the final day of orientation, the first-year students completed a service project which included volunteer work with organizations such as Blue Chip Farms, Hillside Farms, Big Brothers / Big Sisters and the Domestic Violence Service Center. 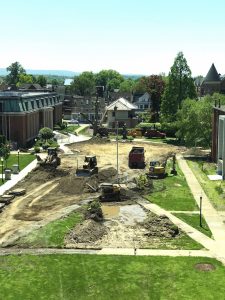 Under the direction of Charles Cary, executive director of facilities, and his team, the finishing touches were put on the project that created the engineering innovation center in the Stark Learning Center, a transformed Stark courtyard, and a campus enhancement project that added green space and a gateway behind the Henry Student Center.

The fences went up around the Fenner Quadrangle the Monday after spring commencement. They came down just days before students returned for fall semester. During all the days in between, crews worked seven days a week on an ambitious schedule that would transform the Wilkes campus. Record-setting rainfall delayed the project but never stopped it.

Under the direction of Charles Cary, executive director of facilities, and his team, the finishing touches were put on the project that created the engineering innovation center in the Stark Learning Center, a transformed Stark courtyard, and a campus enhancement project that added green space and a gateway behind the Henry Student Center. Crews laid some 30,000 bricks to create the South Campus Gateway, the walkways leading to the heart of campus. The project links the Henry Student Center to the heart of the Fenner Quadrangle, where it continues to meet the Karamabelas East Campus Gateway. The project also included adding 40 new trees to the campus, including new trees that are part of the South Gateway and Stark courtyard.

A highlight of the project is the new wrought iron Wilkes University arch marking entry to the heart of campus across from the Henry Student Center. On Welcome Weekend, dozens of first-year students and their families posed under the arch for pictures.

Although students are enjoying the new amenities already, an official ribbon cutting for the South Gateway is planned for Spirit Week in the days leading up to Homecoming Weekend. More details will be announced soon.

Research In and Out of the Lab

Scott Heffelfinger spent a lot of his summer break in a canoe. But don’t assume he was taking it easy. Heffelfinger, a junior environmental engineering major, was part of a three-student team assisting Holly Frederick, associate professor of environmental engineering, with research at North Lake.  The crew used the canoe to paddle out and collect samples to assess water quality at the Luzerne County, Pa., site. The student team, which also included environmental engineering juniors Jillian Weston and Kaitlin Sutton, were measuring nitrate and phosphate levels to see how they impact algae bloom on the lake. The preponderance of algae interferes with recreational use of the body of water.

The trio were among more than 50 students who spent the summer working with faculty on research that tackled problems as diverse as kidney stones, feminist ideology, vegetation at natural gas pipelines and cancer detection and treatment. Many of the students received free housing on campus and stipends funded by mentoring grants, making it possible for them to gain valuable hands-on experience. Research students shared experiences via weekly gatherings dubbed Pizza Wednesdays, held in the Cohen Science Center. Students took turns dong presentations about their research while sharing lunch.

Colonels Gain Real-World Experience At Internships Near and Far

Eighty-five Wilkes University students took their time off from the classroom to jump into summer internships. Students in nearly every major had a chance to build their resumes at companies, research laboratories, non-profit organizations and more.

Senior environmental engineering major Ellen Weber spent her summer at the Smithsonian Environmental Research Center in Annapolis, Md. working in the photobiology and solar radiation lab. She helped develop new methodology to measure the optical properties of tidal marsh sediment pore waters. The purpose was to see how tidal marshes influence the carbon cycle and optical properties of the surrounding waters.

Ellen Weber spent her summer at the Smithsonian Environmental Research Center in Annapolis, Md. working in the photobiology and solar radiation lab.

“No matter what obstacles science throws at you, whether it is broken equipment or wonky data or worse, you really can overcome anything with determination and a smile,” Weber said.

Senior communication studies and sports management major Luke Modrovsky had a slam-dunk of an internship with the Pennsylvania Interscholastic Athletic Association (PIAA). During his time, Modrovsky worked to figure out an important issue: Why is there a shortage of officials? He partnered closely with the START Program (Students of Today are Referees of Tomorrow), which provides classes to help people pass the PIAA tests to become certified. He himself has taken the PIAA tests, being able to officiate various sports.

Now with all his experience, he’s positioned to score a career. “Now that I have this experience as an athlete in six different sports; that’s great when it comes to being at an administrative level.”

Wilkes University’s Maslow Family Graduate Program in Creative Writing held its fourth annual Pennsylvania Writers Conference August 3 and 4. The event showcased all genres of writing and featured eighteen workshops and panels with authors, editors, and teachers. Andre Dubus III delivered the keynote address about his path which led him to become a writer. He is the author of six books, three of which were New York Times bestsellers: House of Sand and Fog, The Garden of Last Days, and his memoir, Townie. Jacquelyn Mitchard served as the plenary session speaker and held a Q&A session with Dubus. Mitchard is the author of 21 books of fiction and non-fiction for adults, young adults, and children, with more than 4 million copies in print worldwide, in 31 languages. Her novel, The Deep End of the Ocean, was the first Oprah’s Book Club pick.

The creative writing program also hosted workshops for the first time under a new partnership with the Norman Mailer Writers Colony. In February, the Maslow Family Graduate Program in Creative Writing announced it would begin hosting the workshops offered by the writers colony.