Wilkes Puts Out The Welcome Mat at Move-In Day 2018

Cars lined South River Street as student volunteers, family and friends carried totes, mini refrigerators, picture frames and mirrors into residence halls.  The click of doors unlocking as first-year students walked into their new rooms was just the beginning of their college careers.

Move-in day was the kick-off to Welcome Weekend 2018 at Wilkes University. A day bundled with nerves and excitement guided students with blue skies and music across the campus gateway.  Volunteers from the football team, women’s soccer team, ROTC, marching band, residence life and the Blue Army among others, helped first-year students settle into their new resident hall digs. 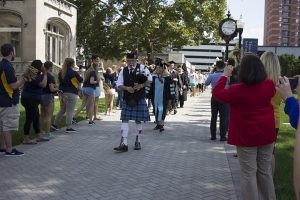 The Class of 2022 makes their way down the Gateway as Wilkes faculty, staff and students give them a big welcome.

Senior early childhood education major Emily Wirth of Vestal, N.Y., is part of the women’s soccer team and assisted in move-in efforts at Roth Hall.  “It went by really fast,” she said, adding, “When we helped move one car, everything was all gone.” 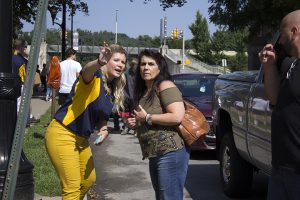 A Wilkes student directs a parent on Welcome Weekend 2018.

Though a busy day for volunteers, it was an equally exciting day for first-year students as they officially began their first year of college.

Mechanical engineering major Daniel Wilczewski of Bushkill, Pa., moved into Sturdevant Hall with the help of his family. Although he was a little nervous to be starting college, becoming a Colonel was the obvious choice for him. “It was one of the few universities I visited and I liked the campus,” he said.

Amy Driscoll of Moscow, Pa., also moved into Sturdevant. Driscoll is joining the Nesbitt School of Pharmacy this year and is up for whatever challenges come her way. “I’m excited to move in,” she said.
“I’m excited to be meeting new people and try different classes.”

Move-in day is primarily for students living on campus, but Welcome Weekend has activities for the entire campus community, including the commuter population. 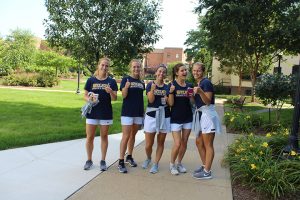 The Wilkes Women’s Soccer Team gets a well deserved break after helping students move into the dorms on Welcome Weekend 2018.

Cole Conner of Lehighton, Pa., will be a student pharmacist and has found the schedule busy but helpful. “It’s been pretty crazy; there’s a ton of people everywhere… it’s a hectic weekend.”

For senior business administration major Kya Lewis of Secane, Pa., who also served as the orientation coordinator the weekend, the event was highly anticipated.  “Everyone was super excited, overjoyed and happy,” Lewis said. “It’s been a good time. It was great to see so many happy faces. It’s refreshing.” 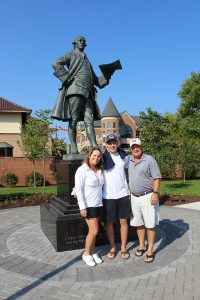 A new Wilkes family poses on the Greenway.

Though the weekend was packed with activity, students were ready for the year ahead. First-year student Jay Gallagher of Reading, Mass., who plans to study business, will be playing for the men’s ice hockey team this fall. Prepared for the academics and the campus comradery, Gallagher said he’s ready to, “just get started and get to know people.”