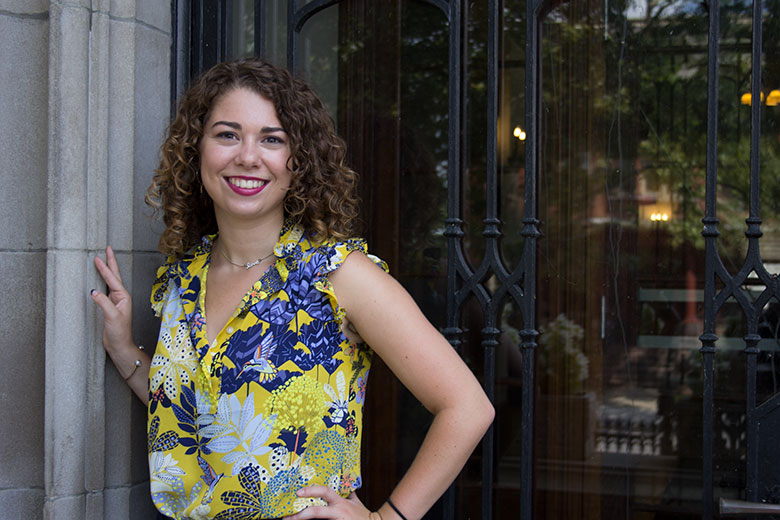 “This week on the Colonel Journal I’m going to show you…” who is Caroline Rickard.

Wilkes junior Caroline Rickard combined her textbook knowledge as a communication studies student with hands-on experience to produce one of the University Marketing Communication Department’s most popular social media features. The Orwigsburg, Pa., native is the host of the weekly video series, “The Colonel Journal with Caroline.” The segments are features on the University’s Facebook page and Twitter feed.

What started off as an internship assignment with the Marketing Communications office turned into a social media boom. Her date night video has reached 2,000 viewers. But Rickard’s day-to-day isn’t just filming back-to-school shopping videos or checking out restaurants in the downtown area to feature on the journal; it’s also involves planning and time management. And it’s given her a new perspective about Wilkes.

“It’s a different thing every day,” Rickard explained.  “I got something different out of all of the videos. When I talked to President Leahy, I got to understand what goes into these big renovations and what’s going on at Wilkes. With the engineering video, I realized what the significance of these labs means, not just to students but to the professors who finally get the technology that they deserve.”

“Understanding video and video marketing really has expanded my knowledge on everything you can do.”

Monday through Friday during the summer found her in Chase Hall from 9 a.m. until noon as the admissions office social media intern. Her afternoon with marketing communications was filled with brainstorming shot lists, her video script, B-roll, pictures, videos, and interviews for the weekly video. By Friday morning, the video was in the hands of Rickard’s supervisor, assistant director of marketing, Patricia DeViva, who posted it to social media channels.

“I’ve learned a lot about video marketing within the marketing communications world. Coming into this internship, I never vlogged, video-edited, I’d never really done any of that,” Rickard said. “Understanding video and video marketing really has expanded my knowledge on everything you can do.”

Rickard had experience working to promote and engage audiences before her latest endeavor. During the spring 2018 semester, she interned with Special Guest App, a startup company based in Wilkes-Barre. Special Guest App is a talent booking application which secures work for entertainers with those looking to book them. Her role included social media and marketing as the company worked behind the scenes with high-profile clients such as Austin Ellis from NBC’s The Voice’s sixth season.

Rickard isn’t just a social media guru. She also serves as the captain of the cross country team, is a member of the student-run public relations agency Zebra Communications, an admissions ambassador and participated in the Alternative Spring Break trip to Costa Rica.

Though she has made her own path at the university, Colonel pride was in her blood from the start as both her parents, Christopher Rickard ’93 and Kathleen (Flaim) Rickard ’92, attended Wilkes. When she was recruited for cross country as a first-year student, it was as if the stars aligned.  “My parents didn’t push it on me. I came here for the open house and met with Dr. (Mia) Briceno (assistant professor communication studies) and she was really welcoming and open.”

Now that she’s been here and cultivated relationships and experiences, she’s prepared for the next step.  “It has strengthened my love to work in marketing and communications because you get to work with so many different people and so many different departments but it’s also a level of creativity. You get to think of creative ways to engage the public.”

Rickard may have two years left of college, but already, she’s found her way.

“I felt like this was my place and I could jump-start my future here — and I have. They’ve given me opportunities that no big school ever could have given me.”